Around the age of eight, Dr. Kaye Husbands Fealing immigrated to the United States from Barbados with her family. She subsequently became intrigued with understanding and solving problems in the context of developing countries. After studying various trade and industrial policies of countries such as Japan and the United States in graduate school, Husbands Fealing’s interest shifted to technological innovation.

“I noticed technological innovation in the developing country context wasn’t really being absorbed into what was happening in major corporations internationally,” says Husbands Fealing, professor and chair of the School of Public Policy at the Georgia Institute of Technology. “So that led me to think about why that is the case. Why is there a development of new ideas in certain places that just don’t carry over to others?”

Rather than entering the consulting field or holding a government job, both her father and graduate school advisor at Harvard University encouraged her to pursue teaching as a career.

First hired at the National Science Foundation (NSF) to establish 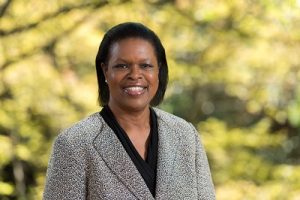 Her teaching career began at Williams College in 1989. There, she served as the William Brough professor of economics.

After 20 years at Williams, Husbands Fealing became a professor in the Center for Science, Technology and Environmental Policy at the Humphrey School of Public Affairs at the University of Minnesota.

“One thing that excites me in whatever position I’m in is getting to interact with students and getting to hear what they are interested in,” she says. “What are the things that matter to them? And trying to provide solutions and opportunities for the students. That’s something that I would say I honed in on when I was at Williams College.”

With her background in technology and innovation, Husbands Fealing transitioned to Georgia Tech in 2014.

“It just seemed like a natural place for me to come to,” she says.

Most recently, she was named dean and Ivan Allen Jr. Chair of the Ivan Allen College of Liberal Arts at Georgia Tech and will assume her role June 1.

“It’s just a really great opportunity to help the faculty, staff and students throughout the organization excel and do their best but also to see and look for opportunities to do things collaboratively across these different schools,” says Husbands Fealing.

Throughout her career, she says it sometimes has been difficult to balance work and family.

“It’s challenging because you want to be there and take care of your child and you also know that you have a profession,” she says. “And I was very fortunate I would say. My parents moved in with us from birth and took care of her for ten years. We were able to get the help we needed to make sure that our daughter was well taken care of.”

Despite being in a male-dominated field, Husbands Fealing has never felt out of place or like “an odd duck.” She credits this to her parents, who always encouraged her to pursue her passions. However, she does recognize that there are challenges with being in the science, technology, engineering and mathematics (STEM) fields as a minority female.

“If I’m on various committees, oftentimes I am advocating for or at least speaking up for issues pertaining to equity, diversity and inclusion,” said Husbands Fealing. “Of course, I turn around and know exactly what some of the issues are and what the solutions are and I’ll speak up in those cases.”

Additionally, she serves on NSF’s Committee on Equal Opportunities in Science and Engineering.

Her recent collaborative paper titled, “Gender Pay Gaps in U.S. Federal Science Agencies: An Organizational Approach” focused on gender pay gaps within the federal government. Her other journal articles and research have focused on food safety and broadening participation in STEM.

In addition to her research, Husbands Fealing has earned a number of accolades including the 2017 Trailblazer Award from the National Medical Association Council on Concerns of Women Physicians.

She describes herself as someone who is a “person of truth, who treats people with respect and acts in a transparent fashion.” In her new role, she plans to focus and address the needs of faculty, staff and students within the school.

“It’s all three that really matter,” adds Husbands Fealing. “And I look forward to really providing and leading in all of those capacities.”

This article originally appeared in the April 2, 2020 edition of Diverse. You can find it here.

National Council of La Raza Changes Its Name to UnidosUS