Lila A. Fenwick, the first Black woman to graduate from Harvard Law School, died on April 4 from coronavirus-related complications, reported The New York Times. She was 87.

Born in Manhattan on May 24, 1932, Fenwick was the daughter of Trinidadian immigrants, Hilda and John Fenwick.

According to the Times, Fenwick knew she wanted to be a lawyer since she was a child. The fact that she was both Black and a woman didn’t faze her. 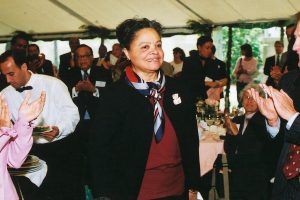 Fenwick graduated from Barnard College in 1953. She graduated from Harvard Law School in 1956, six years after the institution initially began accepting women. After Harvard, she attended The London School of Economics and Political Science.

Over the course of her lifetime, Fenwick became an accomplished human rights official at the United Nations, a private practice lawyer and a benefactor.

While at the U.N., she was a specialist on gender, racial and religious discrimination; the protection of minorities and indigenous populations; and the right to emigrate from oppressive countries.

A major supporter of sickle cell research, she also helped build the Foundation for Research and Education in Sickle Cell Disease.

“She never doubted that she would achieve professional success, despite the racism she grew up with and the sexism she encountered in school and beyond,” wrote the Harvard Law Bulletin in 2003. “… With that determination, she has helped tear down obstacles for generations of students.”