Vermont State Colleges could close down three campuses and cut 500 employees to deal with the financial exigencies arising out of the coronavirus pandemic, reported VT Digger.

The system’s leadership plans to bring this “restructuring” proposal to trustees. 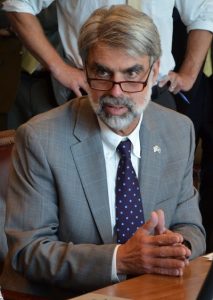 The plan proposes closing down Northern Vermont University, which has two campuses, and consolidating Vermont Technical College’s operations onto its Williston campus. Also proposed is the downsizing of the chancellor’s office, which has already cut four positions. The system includes the Community College of Vermont, but there are no plans as of yet to include it in the restructuring.

VT Digger said lawmakers reacted with alarm to the plan, because the schools were a major employer in the state’s poorest regions.

“I believe that, if we didn’t make a tough decision, it was very likely that the Vermont State Colleges, which is a single corporation, would not be able to continue,” chancellor Jeb Spaulding said in an interview.

The Navajo Nation Hit the Highest COVID-19 Infection Rate in the Country. What Does That Mean for Its Tribal College?