Dr. Jan Padios — associate professor and director of graduate studies within the Department of American Studies at the University of Maryland (UMD) — holds a personal connection to her career research, which analyzes the historical and anticolonial aspects of the Philippines.

Her mother, who was a nurse, immigrated to the United States from the Philippines in the early 1970s. While conducting research in the Philippines, Padios became interested in the structure of the global Filipino labor market and experiences of workers. This led to her publishing A Nation on the Line: Call Centers as Postcolonial Predicaments in the Philippines in 2018.

Alongside her older sister, Padios was the first in her family to attend college in the U.S. She attended Columbia University to originally pursue architecture, which she found both “exciting and isolating at the same time.” 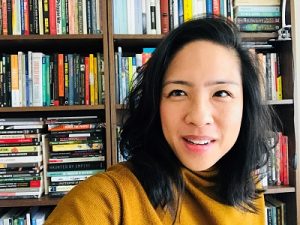 “It can be overwhelming to go to an elite institution without the kind of life experiences or cultural capital that a lot of other students have,” she says.

In her first year, Padios found herself anxious and struggling.

“College is a really dynamic time and there are a lot of cognitive changes, a lot of emotional changes and a lot of thinking and trying to process what the previous [experiences] have been,” she adds.

School served as an outlet for Padios to discover answers to critical political, social and cultural questions. However, Padios says that, at that time, the architecture field did not offer such opportunities.

After graduation, Padios worked at the non-profit Bronx Defenders, which changed her career pathway.

“The experience was really transformative for me,” she says. “It introduced me to a lot of questions about race and housing and space and mass incarceration in the state that I wanted to approach in a critical way.”

Through her experiences at the non-profit, Padios became interested in the field of American studies. She decided to pursue her graduate degree in American studies at New York University (NYU).

“It was a place where I saw students and faculty really taking very seriously aspects of everyday life and questions of identity related to power and cultural studies,” says Padios.

Shortly after completing her graduate degree, Padios continued her education at NYU and earned her doctorate.

While working to finish her dissertation in 2012, Padios saw a job posting at UMD, where she became an associate professor.

“[UMD’s Department of American Studies] is really very oriented towards critical ethnic studies and is continuing to build in that capacity,” she says.

After eight years at UMD, Padios was recently offered the position of tenured associate professor of Asian American studies at Williams College. She will begin her new role during the 2020-21 school year.

Over the last 30 years at Williams, students and faculty members have fought for an Asian American department on campus. In her new role, Padios will be part of the building process and aims to “create a really critical cutting-edge Asian American studies unit.”

“The idea that there is a history of struggle for this unit on the Williams College campus and now there’s increasing support from the institution and administration,” she says. “Now to be one part of that movement on campus and be able to contribute to that and have movement in that way, I know will be fulfilling for me.”

Padios said she wants to create a collective group on campus to support Asian American students. It will address issues and concerns as well as focus on creative work and performances for the Asian American and Pacific Islander communities within the United States.

Throughout her career, Padios has always enjoyed finding the work that “fulfills” her the most. In that vein, Padios enrolled as a master of fine arts student at Randolph College last year.

“The cohesion, the compassion and commitment to creativity in all forms that is the core at the program has been completely transformative for me as a creative person and as a scholar,” she says.

Additionally, she admires and supports students on campuses who “fight for the kind of education, the kind of institution and the kind of experiences in higher education that they want to have,” such as students fighting for diverse representation within the classroom, an ethnic studies program on campus or open conversations about sexual assault.

“I’m very supportive of that and it’s been important for me and fulfilling for me to be a part of those discussions,” she says.

This article originally appeared in the April 30, 2020 edition of Diverse. You can find it here.