The Morris Brown College Board of Trustees has unanimously appointed Dr. Kevin James its 19th president. James, who has served as interim president for the historically Black institution since March 1, 2019, will be among the youngest college presidents in the country at age 42. 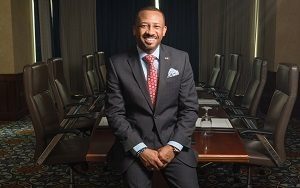 According to Bishop Reginald T. Jackson, chairman of the Morris Brown College Board of Trustees, Morris chose James after witnessing his “tremendous progress within the last fourteen months.” Under his leadership, the board says the school has improved in accreditation, governance, re-branding of itself, partnerships and fiscal stability.

A native of Columbia, South Carolina, James holds a bachelor’s degree in communications disorders and social sciences from Winthrop University; a master’s degree in business management, leadership and organizational effectiveness from The Sorrell College of Business at Troy University; and a Ph.D. in higher education leadership from Nova Southeastern University’s Abraham S. Fischler College of Education.

University of Alabama at Birmingham Names New Dean of Libraries

Duke Lacrosse Team Had a Reputation for Swagger