Former President Barack Obama delivered a rousing commencement speech on Saturday to graduates of the nation’s historically Black colleges and universities (HBCUs) urging them to “have a vision that isn’t clouded by cynicism or fear.”

Obama’s comments sparked national headlines and widespread attention. His remarks came amid the COVID-19 pandemic, which forced many HBCUs — and other colleges and universities across the nation — to postpone or hold virtual ceremonies two months after the health crisis gained a foothold in the United States. 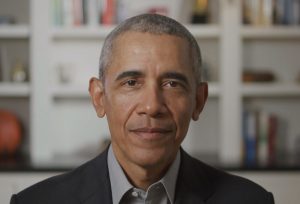 During the two-hour “Show Me Your Walk HBCU Edition” virtual ceremony — the brainchild of Dr. Michael J. Sorrell, president of Paul Quinn College — Obama took a jab at the Trump administration’s handling of the coronavirus pandemic. As of mid-May, the pandemic has resulted in the deaths of nearly 90,000 Americans.

“More than anything, this pandemic has fully, finally torn back the curtain on the idea that so many of the folks in charge know what they’re doing,” said Obama. “A lot of them aren’t even pretending to be in charge.”

He challenged the graduates to “seize the initiative” and to speak out against inequities in society, like the shooting death of Ahmaud Arbury, an unarmed Black man who was shot to death by two White men while jogging in Brunswick, Georgia back in February.

“Injustice like this isn’t new,” Obama told the more than 27,000 HBCU graduates who earned their degrees this year from public and private Black colleges. “What is new is that so much of your generation has woken up to the fact that the status quo needs fixing; that the old ways of doing things don’t work; and that it doesn’t matter how much money you make if everyone around you is hungry and sick; that our society and democracy only works when we think not just about ourselves, but about each other.”

Obama’s message resonated with graduates like Tytiana Christmas, a computer engineering major at Virginia State University who earned her degree over the weekend.

“President Obama’s message was very inspiring because it touched on life at an HBCU and how we, as HBCU graduates, have been given the tools that we need to excel in life,” said Christmas. “Given the way that the world is currently, it may not have been the graduation ceremony that we would have wanted, but we have graduated and fulfilled our wildest dreams.”

JaQuana Williams, an English and public relations major at Mississippi Valley State University, said that the star-studded event — hosted by comedian Kevin Hart and featuring appearances by rapper and actor Common, singer Wyclef Jean and actress and choreographer Debbie Allen — brought needed attention to the nation’s storied HBCUs which have struggled in the wake of the coronavirus.

“HBCUs prepare students academically to be globally competitive, but they are also rooted in community which has a long history of uprooting and dismantling injustices,” said Williams, who was inspired by Obama’s address. “He [Obama] spoke to the visionaries, advocates, creatives and the future game changers that are HBCU students who enter their respective campuses one way, but ultimately leave as change agents.”

On Sunday, the Thurgood Marshall College Fund and the United Negro College Fund partnered with Facebook, All Def, Watch The Yard and Paul Quinn College to host a virtual HBCU Graduation Cookout that included music, stories from graduates and congratulatory messages from well-known figures like Dr. Michael Eric Dyson, Donna Brazile and Lionel Ritchie — all while raising money for Black colleges.

“To the graduates, you have made an achievement against all odds and circumstances,” said Reverend Al Sharpton, the civil rights leader and television host. “Make sure you continue to know that and duplicate that throughout your life.”

PWIs and HBCUs Need to Create Partnerships, Not Competition

Presidents’ Athletic Conference to Postpone Many Fall Sports to Spring

I’m a Doctor – Now What? Lessons from a First-Generation Scholar