Aeneas Hawkins, an African American student from Penn State University, said on Twitter he was the target of racial abuse while on a road trip back home to Ohio on Saturday. 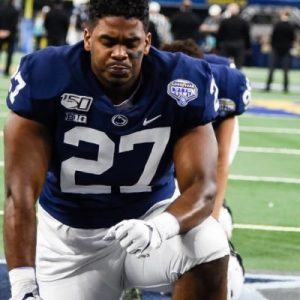 “I’m on a road trip back home, and stopped for gas about 3 hours away. As I’m coming out of the store after paying for my gas, I made eye contact with a white man who’s about 30 years old,” tweeted Hawkins who plays football for Penn State. “He stared longer than I thought was normal, but I thought nothing of it. I’m a larger man in all Penn State gear, so maybe he knew I played ball. As I walked though, he yelled “F*** you! You black son of a b****.”

“Although my inclination was to jump through his face when he stood close to me, I know that I’ll always be guilty before proven innocent. Although I had done nothing out of the ordinary to invite conflict, it found me just for LWB [living while Black],” he tweeted.

Hawkins called his father, Artrell Hawkins, and told him about the incident, but didn’t report it to the police, said The Tribune-Democrat. However, his father reported the incident to police in Cambridge, Ohio. The student’s father said the officer who took his statement was “dismissive” of the incident or “naive” that a racist encounter could happen there.

The police department there confirmed it took a statement and said in a report filed that it viewed CCTV footage but couldn’t identify the man from the encounter. There was no audio with the video, the police further said.

Hawkins and his father had recently participated in a church discussion about the shooting death in Georgia of Ahmaud Arbery, a 25-year-old Black man who was killed in February while he was out jogging.

“We talked through the Arbery case, the society we live in and the risks for young, black men,” said Hawkins’ father.

In his tweets about the incident, Hawkins urged people of color to always be on the alert.

“I’m posting this to remind my brothers and sisters of color to stay aware of their surroundings and to be safe. Although that man is not representative of this entire country, the anger and hate he has in his heart represents enough for my people 2 be extra cautious at all times,” he said.

Birthright Citizenship is Under Attack…Again