The word “transformational” was used frequently by leaders of historically Black colleges and universities to describe multimillion-dollar grants they received from philanthropist MacKenzie Scott. In most cases, Scott’s gifts to 22 HBCUs, ranging from $4 million for Voorhees College in South Carolina to $50 million for Prairie View A&M University in Texas, were the largest individual gifts those institutions had ever received.

Higher education leaders say the impact of these unrestricted gifts will be felt for generations and change the lives of students, faculty, staff and communities.

“One of the issues our HBCUs have is that they often don’t have the endowments that some of the other institutions have, so that when they get into financial trouble they don’t have something on which to fall back,” says Dr. Belle S. Wheelan, president of the Southern Association of Colleges and Schools Commission on Colleges. SACSOC is the regional accrediting organization serving many of the HBCU recipients of Scott’s gifts.

“Many of the HBCUs are also enrollment-driven so when enrollment decreases it puts them in a financial bind,” Wheelan adds. She explains that for accreditation purposes, “this is one of the challenges they have in meeting our financial stability standards, so [these gifts] should help keep them out of trouble.” 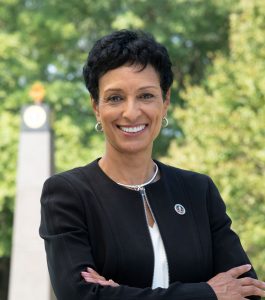 Dr. Aminta Breaux, president of Bowie State University (BSU) in Maryland, which received $25 million, says the funds will have “a huge impact” on all the institutions involved.

“This gift underscores the urgent need for support of higher education for marginalized communities, as well as BSU’s strong and distinctive position to make a dramatic difference.”

Breaux says the contribution will ensure the public institution’s long-term viability by “enabling investment in student financial support, advances in academic excellence and innovation, and substantial increases in the university endowment.”

In announcing the second round of contributions in December, Scott wrote that they included organizations and institutions that were addressing “long-term systemic inequities that have been deepened by the [COVID-19] crisis.” She noted those inequities include “education for historically marginalized and underserved people.” Most of the HBCUs were included in the second tranche of gifts, although several received contributions in both rounds.

The size of the donation floored Simmons to the point that, according to a university web statement, she famously said, “At first I thought I had misheard the amount and I asked them to repeat it. They clarified and said it would be $50 — five-zero — million.”

As a former Ivy League president, Simmons has a unique vantage point.

“I would have celebrated a gift of that size even as president of Brown, with its large endowment,” she explained. “However, the fact that it will have such an out-sized impact at Prairie View naturally aroused strong emotions of incredulity on the one hand and gratitude on the other.”

Breaux and Simmons say helping to relieve the increased financial burden facing students and their families due to the pandemic is a priority.

At Bowie State, one of the concerns “was making sure that we are, first and foremost, providing scholarship dollars for our students,” Breaux says, explaining that, at the end of June, Bowie State returned more than $3 million in fees to students because of the state’s stay-at-home orders. However, many students didn’t have Wi-Fi access or adequate computer equipment in their homes. Although the federal CARES Act for COVID-19 provided helpful funding, Breaux says Scott’s gift will allow the institution to provide support for students beyond the pandemic.

“We have to continue to adjust,” Breaux says. “Not everyone does well in a virtual learning environment, so how do we help those students? We need to position ourselves for success beyond COVID-19. That’s where I see the gift from MacKenzie Scott being a huge help to build and sustain the successes that we’ve had.”

PVAMU students’ financial problems are also a paramount consideration in determining how the funds will be used.

“Our students have faced job loss, a range of insecurities, family needs, academic challenges due to online instruction, and other problems that often seem impossible to overcome,” Simmons explains. “We wanted, at the least, to make certain that students didn’t opt to discontinue their education because of the financial strain they are under.”

For Voorhees College, an historically Black institution in South Carolina with an enrollment of about 500, Scott’s $4 million gift —  its largest single donation in history — will have a wide-ranging impact.

“Her gift will be used in a variety of ways to include scholarship dollars for students, financial support to non-traditional and international students, healthcare for employees, facility upgrades and deferred maintenance, and the establishment of endowed chairs,” said Dr. W. Franklin Evans, the former president of Voorhees College, in a statement on the college website.

At Morgan State University in Baltimore, President David K. Wilson recalls becoming “teary-eyed” upon being notified of its $40 million gift from Scott. 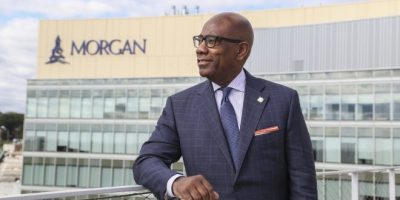 The largest previous individual gift Morgan had received was $5 million. “I began to reflect on the path I had traveled that landed me at Morgan as president. I left home with $5 to go to Tuskegee (for college) because that was all my father and mother could give me.”

Wilson calls MacKenzie Scott’s donations to HBCUs “quite revolutionary in the modern era,” comparing her largesse to the early philanthropists who invested heavily in HBCUs — “the Carnegies, the Rockefellers, the DuPonts, the Mellons, who understood that, if the country was going to be true to the ideals of the constitution and be competitive long-term, it had to educate the sons and daughters of newly freed slaves,” he says. “And so those early gifts enabled HBCUs to go on and educate the top leaders in the world over the last 100 or so years.”

Wilson believes Scott understands the mission of HBCUs very well, “that they are committed to closing the equity gap, committed to addressing issues of social and economic injustice and of educating students who have to be our innovators, engineers, creative artists, teachers and our lawyers of the future.” Wilson describes the funds as “a game-changer” for Morgan that will be used wisely.

“We’re not in a spending mode,” he remarks. “We’re in an investing-for-the future mode.”

He says the Research 2 institution is aiming for Research 1 status.

“This gift will enable us to jump-start new academic degree programs that will be in alignment with where the country and the world are moving,” Wilson says.

Lincoln University in Pennsylvania will use its $20 million donation to provide more scholarships and invest in teaching, research and faculty development, according to Dr. Brenda Allen, Lincoln’s president.

Claflin University in Orangeburg, South Carolina, is targeting social justice and equity issues. Dr. Dwaun J. Warmack, Claflin’s president, says the $20 million gift will have “an immediate, transformational impact on “preparing students to champion and shape the nation and world we all need — one that is more just, fair and equitable.”

Morehouse College in Atlanta, which received $20 million, plans to “acquire state-of-the-art tools it needs to target top students, upgrade our computer network and information infrastructure, and attract new donors to support scholarships for the men of Morehouse,” according to a statement by Monique Dozier, vice president of the Morehouse Office of Institutional Advancement.

Several HBCU leaders discussed the future impact Scott’s leadership will have on philanthropy. In 2019, Scott signed the Giving Pledge, which was created by Bill and Melinda Gates and Warren Buffett to encourage wealthy figures to donate a majority of their wealth as philanthropic gifts.

Last June, Netflix co-founder Reed Hastings and his wife, philanthropist Patty Quillin, announced a $120 million donation to HBCUs and an additional $40 million each to Morehouse and Spelman Colleges, which are also included among Scott’s recipients. A few weeks later, the Community Foundation of Greater Memphis stated that their board was inspired by the Netflix founders’ gifts and donated $40 million to the struggling LeMoyne-Owen College in Memphis.

Scott says the recipients she selected had demonstrated “strong leadership teams and results” despite challenges that include poverty, systemic racial inequities and low access to philanthropic capital.

For the receiving HBCUs, this recent burst of giving has promising implications for the immediate and long-term future.

“The immediate availability of these funds to support student financial aid, to initiate academic programs and to add so significantly to our endowment all speak to the transformative nature of the gift,” Simmons says.