On May 28, Diverse held a virtual ceremony for the 2020 Arthur Ashe Jr. Sports Scholars Awards, an annual program honoring minority students who have excelled in sports, academics and community service. This year, the first place winners were football player Rodrigo Blankenship, a recent graduate of University of Georgia, and swimmer Raena Eldridge, a senior at Texas A&M University. They were chosen from more than 700 nominees. 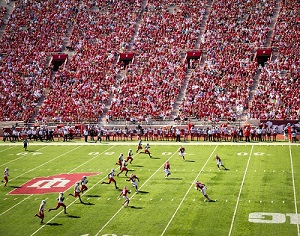 “The title of student athlete is respected and admired and has led to so many opportunities because of the weight it holds in the eyes of employers, graduate schools and professional schools,” Eldridge said, addressing a crowd on Zoom. “What makes an athlete great is not talent and force of will but a commitment to excellence, a quality that does not confine itself to any single facet of life.”

Martin described student athletes of color as a part of a generation of “change makers.”

“Be brave enough to be yourself,” she said. “Embrace who you are. … Focus on the passions and strengths you bring to the table, no matter where you’re seated.”

A day earlier, Diverse Editor-at-Large Dr. Jamal Watson hosted an online panel discussion about what the coronavirus means for the future of college athletics.

The consensus among panelists was to prioritize safety, no matter how eager athletes and their fans are to resume games. If the classroom is unsafe, they said, so is the field.

“I think it’s very important for us to observe health and safety as job one, and then everything else falls in,” said Sean T. Frazier, associate vice president and director of athletics at Northern Illinois University. “We are a part of the university. We’re not a separate entity.”

Recognizing that games are a major revenue stream, Frazier said that now is a time to reevaluate financial models that heavily rely on certain sports, like football. The system is precarious, he said, and it also means there’s a “temptation to cut” other sports that are less profitable, even if they benefit students.

Dr. Ketra Armstrong, associate dean for graduate affairs and NCAA faculty athletics representative at the University of Michigan, noted that cuts might not be a bad idea, but advocated for cuts to the “bells and whistles and extravagance” of college sports rather than the sports themselves.

“One of the things this pandemic has required everybody to do is to determine what’s essential,” she said.

These budgetary worries spurred by COVID-19 are nothing new for historically Black colleges and universities, noted Jacqie McWilliams, commissioner, Central Intercollegiate Athletic Association (CIAA). But “we’ve always been truly resilient at our institutions,” she said. “I think that’s just the HBCU foundation. We’ve not always had a lot so we’ve been able to build upon what we do have and make the best of the resources.”

Still, it’s “surreal” for her to imagine the possibility of a year without campus sports.

While final decisions for the fall have yet to be made, Dr. Eric Barron, president of Penn State University, believes there will be a way to continue sports while keeping students and faculty safe. His biggest concern is crowds of fans, but he sees the return to sports as a “when not if” situation. He emphasized, though, that student athletes need to be a partner in these decisions.

In the meantime, student athletes are struggling with mental health, Armstrong said, precisely because student athletes see sports as so central to their identities, especially now that they’re home and can’t play. She hopes athletes will take this time as a chance to pause and focus on academics.

“They’re experiencing this vast emptiness,” she said. “What we try to remind them is athletics is what they do, but it’s not the fullness and the wholeness of who they are.”

Frazier made the point that sports isn’t just fun and games for a lot of these athletes. For minority students, sports scholarships can be a tool for social mobility, a way to leave sometimes difficult home environments and afford college degrees.

“I’m really concerned about access and opportunity,” he said. “I’m one of those folks that would have not gone to college if it wasn’t for an athletic scholarship.”

That’s why panelists agreed that universities shouldn’t take away athletics scholarships, even if students can’t play next fall.

“We brought them in the door,” Barron said. “We’re not going to change the rules on them.”