U of Nevada Police Chief: I Know We Let Our Community Down in the Past - Higher Education

U of Nevada Police Chief: I Know We Let Our Community Down in the Past

The University of Nevada’s police chief Todd Renwick has acknowledged that campus police “let our community down in the past” but has “put in the work to grow and to learn,” and is “always striving for better.” 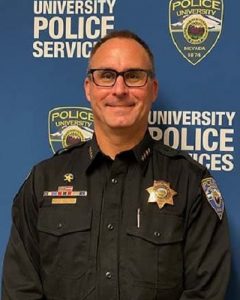 Renwick’s comments were made in reference to the death of George Floyd, which he described as occurring “at the hands of police officers.” He also said he and his officers commit to being more community oriented.

“I know our department has made mistakes,” said Renwick in a statement on the university website and on Twitter. “This damaged many of our relationships, especially with our underrepresented groups and minority populations. Since the incidents that took place in 2017, we not only vowed to be better, but we’ve put in the work to grow and to learn.”

In one of the incidents Renwick is referring to, a White campus police officer joked about shooting a Black student, Kevin Reynolds, during a peaceful traffic stop. The officer was put on administrative leave and the university’s then police chief, Adam Garcia, apologized for the officer’s “inappropriate and offensive comments.”

In the second incident, a social media post showed a campus police officer mocking alumnus and footballer Colin Kaepernick for kneeling during the national anthem during a game to protest racial injustice. Garcia apologized for that as well.