However, the coronavirus pandemic, which shut down colleges and universities across the country, has forced those same students to go back into the closet after returning to their hometowns. 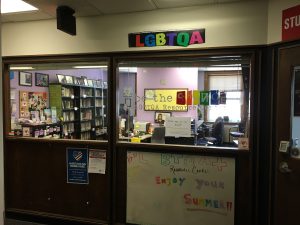 “For LGBTQA+ people in particular, they get a lot of their support from the community itself,” says Dr. Pat Tetreault, the founding director of the LGBTQA+ Center at the University of Nebraska-Lincoln (UNL). “So not being able to connect, I think that’s just a challenge for everybody.”

Those students living in unsupportive households are less likely to access LGBTQA+ specific resources offered by their institutions online, according to the University of Illinois at Urbana-Champaign (UIUC)’s LGBT Resource Center director Leslie K. Morrow. For example, students might not feel comfortable talking on the phone to on-campus support systems due to fear of being overheard by family members or being concerned about their internet history being monitored.

“Clearly, as great as technology is, there are some things that you just can’t substitute with regards to in-person interaction,” says Morrow.

To support students in unsafe home environments, Andy Cofino, director of the LGBT Campus Resource Center at the University of California at Los Angeles (UCLA), says it takes the help of an entire campus.

Resources need to be highlighted in a transparent way and campus organizations should include the experiences of LGBTQA+ students in their own messaging outlets to reach a broader audience.

“I think if a student is in an unsafe home environment, they’ve had to move out of their home really quickly or had other very high risk factors that are happening or are in survival mode, they may not be thinking about the virtual programs that are being offered for students,” he says. “That might not be their first thought. So, I think also just reminding students of what’s available is also very helpful.”

Despite campus closures, institutions are still able to offer counseling through telehealth networks or provide one-on-one check-ins for students struggling to cope with the mental and physical impacts of the coronavirus.

“I know not only my center but other centers are trying to simulate as best as we can this online space, using a variety of different social media channels and networks to be there to provide some sort of community,” says Morrow.

She acknowledged that it is normal to occasionally have bad days during a period of increased stress. However, if the bad days are seen on a more regular basis, Morrow says it is important for students to seek the available counseling.

LGBTQA+ centers at UCLA, UNL and UIUC, for example, have developed their own campus resources to help students feel supported through the current changes brought on by the pandemic.

“Even though we can connect with people by phone or by Zoom, that doesn’t necessarily mean people don’t feel isolated,” says Tetreault. “And I think if they don’t have privacy and don’t have personal support or affirmation, that that makes it even more challenging to manage all of the changes that people are having to manage given the current situation that we’re in.”

For student staff at the LGBTQA+ Center, Tetreault scheduled weekly check-ins on top of the regular staff meetings to access needs, feelings and stress levels. Additionally, the school has also offered free or low-cost webinars to the student staff that address topics such as mental health or LGBTQA+ resources during this time.

“I think that this is a challenging time for a lot of people because even with all the connection available, it does create an aspect of isolation that people aren’t necessarily used to having to manage,” Tetreault adds. “But at the same time, I think it also has provided opportunities for people to really show how much they care.”

At UCLA, the LGBTQ Resource Center has continued to offer access to weekly discussion spaces that originally occurred on campus as a way to create the feeling of a community.

“Our weekly programs have been very successful,” said Cofino. “We were slowly continuing to maintain a lot of presence in those spaces. And we’ve heard repeatedly from students that having those virtual programs available [has] been really critical.”

Additionally, for vulnerable populations, such as students in unsafe home environments, UCLA launched a series of online videos and resources that students can access on their own time and discretion. One feature of the online resource offered by UCLA is a safety button in case students need to exit out of the browser quickly.

“I think often times, especially when we’re isolated, we don’t initially think that there are people that are actually there and available as a resource,” says Cofino. “So, I would say to students, if they have questions, if they have concerns, please seek out the many resources that are available on your campus.”

At UIUC, the LGBT Resource Center worked with campus counseling services in order to offer virtual workshops and networks to build strategies to develop ways to cope with the impacts of the pandemic, according to Morrow.

In addition to the center’s resources, Morrow has found that students have taken the initiative to stay connected with one another through their own creative ways, which include hosting movie watch parties, game nights and study groups during finals week.

In addition to campus-wide resources and initiatives, there are also national resources that aim to support the mental health of LGBTQA+ youths and students including the Trevor Project and Trans Lifeline.

The Trevor Project, for example, is a suicide prevention organization that helps LGBTQA+ people under the age of 25. There is a lifeline, which can be reached at 866-488-7386, as well as confidential messaging boards available through chat or text messages. The organization also offers suicide prevention training and workshop sessions.

The Trans Lifeline is a 24/7 hotline for transgender people to connect with the LGBTQA+ community and find support for identity or mental health issues. Students can reach the organization at 877-565-8860.

For those LGBTQA+ students who have had thoughts of self-harm, the National Suicide Prevention Lifeline can be reached at 800-273-8255.

What Will Happen to the Most Vulnerable Student Populations During the COVID-19 Public Health Crisis?