Protestors Tear Down Controversial Pioneer Statues at U of Oregon

As protests against systemic racism continue around the country, activists on Saturday tore down two ‘pioneer’ statues on the University of Oregon campus that many say represent a legacy of the murder of Native Americans, reported KLCC. 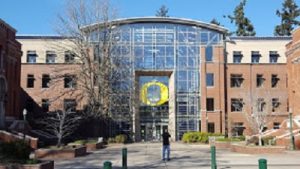 Following the toppling of the statues, the university issued a statement saying it does not condone what happened, especially given the president of the university last week asked a committee to look into whether the statues should be removed.

“Our country, state and campus are coming to terms with historic and pervasive racism that we must address, but it is unfortunate that someone chose to deface and tear down these statues,” said the statement. “Decisions about the future of the Pioneer statues and other monuments should be made by the campus community through an inclusive and deliberative process, not a unilateral act of destruction.”

The two statues on the university campus have been controversial for years and have been vandalized before. Last year, Native American students objected to the statues’ presence on campus.

“The statue either misrepresents Oregon’s history or at least tells a very one-sided story of Oregon’s history,” Bret Gilbert, former co-director of the Native American Student Union the university, said last year. “Whether it’s erasing it or not, it perpetuates the wide-held belief that this land was discovered and uninhabited … and that’s not the history of this land.”

Denying that Racism Exists is Not Only Delusional . . . it’s Racist