Dartmouth College will replace a weather vane that “represents an offensive image of a Native American” and the University of Nevada Las Vegas (UNLV) has removed the statue of its mascot that many say is connected to the Confederacy. 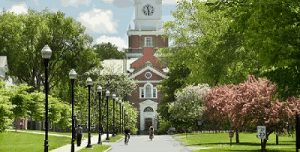 to police brutality. On many college colleges around the country, student groups have been calling on their institutions to institute more equitable policies and to sever connections with racist figures.

At Dartmouth, the 600-pound weather vane shows college founder Eleazar Wheelock sitting on a tree stump and speaking to a Native American man clad in feathers and smoking a long pipe, who’s sitting on the ground. Wheelock has a barrel of rum placed behind him.

A petition started in late May to remove the weather vane said it is “a caricature of a young male Native being ‘educated’ by the white schoolmaster.” It also said the depiction “is a sad reference to the plight alcoholism and drug addiction played in the stealing of native lands to found Dartmouth College.”

In a statement, Dartmouth president Philip J. Hanlon shared students’ and the community’s concerns about this imagery.

“It is clear that the images portrayed on the weather vane do not reflect Dartmouth’s values,” said Hanlon. “We are tremendously proud of our historic — although at times flawed — commitment to welcoming and educating our accomplished Native American students. We are equally proud of the contributions Native Americans have made to Dartmouth’s founding and to the current strength and distinctive character of our institution.”

At UNLV, the statue of its mascot ‘Hey Reb!’ has for long been controversial. More than 4,000 people signed a recent petition calling for the statue’s removal. The petition said the statue “is racist and is rooted in a Confederate mythology which has no place on our campus.”

UNLV president Marta Meana said the university and the donor “agreed it was best to remove the statue” and return it.

“Over the past few months, I have had discussions with multiple individuals and stakeholder groups from campus and the community on how best the university can move forward given recent events throughout our nation,” Meana said in a statement. “That includes the future of our mascot. The frequency of those conversations has increased in recent weeks, and I will have more to share with campus once the listening tour is complete.”