Roanoke College recently established The Center for Studying Structures of Race to address systemic racism and further explore the institution’s history with slavery.

After partnering with other institutions to develop the Universities Studying Slavery consortium in 2014, Roanoke College began to study its own history. Though the school did not own slaves, several buildings on campus were constructed using enslaved labor, according to the college’s website.

“We are really interested in thinking about our college’s history and historical connections with institutions of slavery at our own institutional level,” said Dr. Jesse W. Bucher, an associate professor of history at Roanoke College and director of the new center. “But also, we are interested in putting effort into restoring and preserving historic structures that were connected with slavery as well.”

The new center will be housed in a renovated building that was once a slave quarter. It was built in 1853 and was acquired by Roanoke in 2002. The process to establish the center began a few years ago.

“It’s something that we’ve actually really been working on for a longer period of time, especially when you include the preservation work that went into setting up the building itself,” said Bucher.

“The center will ensure a continuing institutional focus on racism and its pernicious effects in American society,” said Dr. Richard Smith, vice president and dean of Roanoke, in a statement. “Its events will provide opportunities for students, faculty and staff to understand more deeply the legacies of racism, to discuss remedies to address them and to take action to promote change.” 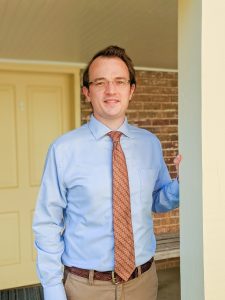 The center’s bottom floor is dedicated to an academic community learning space to host events and classes. However, not everyone can reserve a space in the center. The course or event must be related to the space itself or engage in similar conversations.

“It is a really fraught space,” he said. “To have instructional activities in a former slave quarters really asks a lot of students. It can be unsettling at the first level. It can also be a traumatic experience for students to enter into that space that has that historic weight to it, that gravity to it.”

Through conversations and feedback from students, the institution is learning ways to address issues surrounding diversity, equality, institutional racism and bias. The center will serve as a collaborative space to address those issues, according to Bucher.

In the short term, the goal is for “interested parties” to discuss how to adjust the current pedagogy and engage with questions of diversity. Over the long term, Bucher encourages faculty, staff and other administrators to develop new classes and research with students to further develop those conversations.

“It might be a more massive change that needs to take place like this,” he adds. “I think this offers a safe space to do that.”

Though the pandemic has shifted original plans, the center will host a few events in the fall. There will be workshops to coordinate the academic and pedagogical development between professors on campus and the Office of Multicultural Affairs.

The second level of the building will serve as a museum exhibit to portray the history of the building’s slavery as well as that of the surrounding areas.

“We designed a project that was really trying to maximize the use of the building itself,” said Bucher. “We wanted to be mindful historically of what that building was and what it was used for and what it represents. But then also find a way to really bring people from both our campus and wider community into dialogue with one another, both in and around the building itself.”

In the future, if the center gains more funding, Bucher said there will be rotating annual themes. Researchers will be hired to teach courses related to those specific themes.