Brigham Young University-Idaho is under fire after its Performing and Visual Arts Facebook account compared the past persecution of Latter-day Saints to centuries of African American enslavement, reported the Salt Lake Tribune.

The post, which has since been deleted, detailed the history of Latter-day Saints who fled to Utah, formerly Mexican territory, to escape discrimination. In one paragraph, it says Latter-day Saints were hung, beaten and killed for their beliefs, but that after resettling in Utah, they “prospered because of hard work and dedication.”

Though it’s true that Latter-day Saints faced discrimination, the post’s statement that the church was “against slavery even before the Civil War” is false. As the Tribune notes, some church members took slaves with them and the school’s namesake Brigham Young even said in 1852, “We must believe in slavery.” 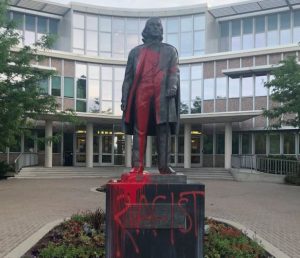 A photo of Brigham Young which was vandalized with red paint earlier this week as part of anti-racism protests nationwide.

The post also suggested that African Americans could follow the Latter-day Saints’ example, writing “YOU CAN RISE ABOVE.” According to the Tribune, it advised African Americans to be “humbled” by their past and forgive their oppressors.

For many Black students though, the post was tone-deaf and only added to the pain they were feeling due to the recent  deaths of George Floyd, Breonna Taylor and Rayshard Brooks at the hands of police.

“Black people were taken from their families. Their names were changed. Their agency was 100% taken. And those very Saints were persecuting Blacks, as well,” Richard Luyhengo, a Black international student at BYU-Idaho said. Another student said the history of Latter-day Saints is “incomparable” to Black history.

Nonetheless, Black students at BYU-Idaho hoped the post could initiate conversations about systematic racism in the U.S. But, according to the students, BYU-Idaho administrators “have refused to sit down with them, acknowledge the post existed or apologize.”

Meanwhile, the Tribune said the school did not respond to its inquiries.