They said Barr has “failed to fulfill his oath of office to ‘support and defend the Constitution of the United States,'” reported CNN.

The 6-page statement, signed by more than 60 members of the law school, further said that Barr’s actions “have undermined the rule of law, breached constitutional norms, and damaged the integrity and traditional independence of his office and of the Department of Justice.” 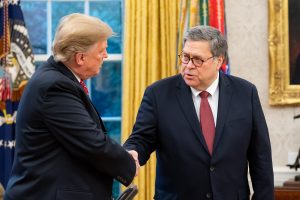 The legal educators criticized Barr’s handling of the Mueller Report, his involvement in the cases of Roger Stone and Michael Flynn, and his role in the federal government’s use of force to disperse peaceful protesters outside the White House in early June.

“He obfuscated and misled the American public about the results of the Mueller investigation,” said the letter. “He wrongfully interfered in the day-to-day activities of career prosecutors, and continues to do so, bending the criminal justice system to benefit the President’s friends and target those perceived to be his enemies. He participated in the forcible removal from public space of peaceful protesters, exercising their First Amendment rights to speech and assembly in order to protest racial injustice. His actions have posed, and continue to create, a clear and present danger to the even-handed administration of justice, to civil liberties, and to the constitutional order.”
The letter said that the signatories’ criticism was not politically motivated.
“We include members of both major political parties, and of none. We have different legal specialties and represent a broad spectrum of approaches to the law.”
Barr received his juris doctor degree from George Washington Law in 1977. In 1992, the school awarded an honorary degree to Barr, who at the time was serving as attorney general under President George H.W. Bush. In the past, Barr has also served on the school’s Board of Advisors and has raised money for and donated to the school.
Semantic Tags: Attorney General • Criticism • Geoffrey Berman • George Washington Law School • Letter • Statement • William Barr