Stare Down the White Gaze: Demystifying the “Model Minority” Stereotype

“You brought the virus here.” These words were thrown at me on a street corner as I walked my dog, soon after the stay-at-home order was issued. Before I realized that these words were meant for me, the man who uttered them already moved on.

“You brought the virus here.” These words echoed in the empty streets of New York City. They reminded me of my only car accident 16 years ago when I got my driver’s license, one of several official credentials I had accumulated after immigrating to this country. I was pulling out of a parking lot, intently paying attention to the curved road on the left, when “boom!” a vehicle came out of nowhere and hit the right corner of my car. My reaction was an involuntary yelp, unlike the dumbfoundedness on my part as those words were hurled at me. The man’s look and manner were not menacing. His voice was not loud, nor could I detect anger in it. He could have said, “You dropped your gloves,” with that voice. Obviously, he was not interested in my reaction for he kept going. He just picked the target, blurted out the words, and left. 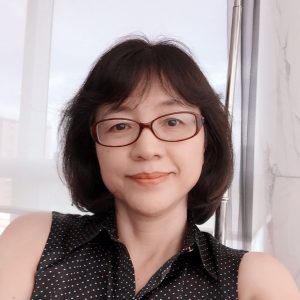 “You brought the virus here.” The words continued to reverberate in my head for days afterwards. The lack of emotional undertone in that voice felt more terrifying in the aftermath. I was the target of these words because I am Asian—Chinese American, to be exact. When I first came to this country, there used to be a hyphen between Chinese and American—Chinese-American. Now, the hyphen disappeared. I like it without the hyphen–Chinese American is a whole identity, not a split one such that you could partially belong to each group. As a Chinese American, I am free to cross boundaries. I could choose to be invisible. I relished the fact that I could be in this country but not of it. I fit because I don’t fit. Life in the margin felt safe and secure, for the most part. Of course, as an Asian American woman in the academia, I have had my share of being the target of micro-aggressions and injustice, a price I have to pay for being perceived as a quiet “model minority.” Outside academia, there was only one incident on the subway, when what seemed to be a teenage mother yelled at me, “What are you looking at?” when everyone on the train was staring as she screamed at her baby. She picked me, I thought, because I was the only Asian among the crowd. But no one had blatantly demeaned me because of my Chinese American background. That is, until this man on the street confronted me with the virus remark. This had to be the first time for me to be vilified because of my race.  I felt, for the first time, the weight of Maya Angelou’s words, “People will forget what you said, people will forget what you did, but people will never forget how you made them feel.”

The feeling lingers long after the man on the street corner uttered those words. Before the COVID-19 pandemic, I was an invisible Chinese American. During the pandemic, I was made a scapegoat because I am Chinese American. I wasn’t alone—verbal and physical assaults on Asian Americans have been on the rise. Even Asian American healthcare professionals were subject to xenophobic taunts. I thought I was invisible but now I’ve become a target. The most profound revelation for me came from my daughter, who was born in this country. Upon hearing my story, she remarked that being an invisible Chinese American is in itself a privilege.

So true! The fact that no one had ever insulted me because of my race speaks to a privilege I have taken for granted. The Black and Brown people in this country have, for centuries, had to deal with all kinds of brutality, injustice and demeaning assaults their whole lives as a result of their racial backgrounds. Intellectually, I am aware of the prevalence of racial injustice. But emotionally, I didn’t really know the pain of racial injustice until I felt it myself. I now know the unforgettable, gut-wrenching feeling that permeates every fiber of your being, when the pain was incurred because of something you were born with—your racial background. Now, I could feel the rage, viscerally, of Black and Brown people over the murder of George Floyd.

The verbal assault I endured can’t be compared with the atrocities inflicted on the Black and Brown people. But the discrimination and scapegoating of Asian Americans during the pandemic should serve as a wake-up call to Asian American’s complicity with the “model minority” stereotype. The stereotype came into existence under the White gaze to denigrate Black Americans, shifting the blame for racial injustice from systemic racism to Black people.  It didn’t help when the first Asian American presidential candidate, Andrew Yang, called on Asian Americans to show American-ness by wearing red, white and blue, and “do everything in our power to accelerate the end of this crisis.” This sounds like perpetuation of the “model minority” stereotype. What we need now is the courage to stare down the White gaze, and join in the fight for racial and social justice.

Dr. Yang Hu is an associate professor of Literacy Education in the School of Education at Hunter College, City University of New York.

Pandemic Could Potentially Delay Graduation for Students of Color

Report: Education is Key Factor in Gender Bias Among Women in Politics