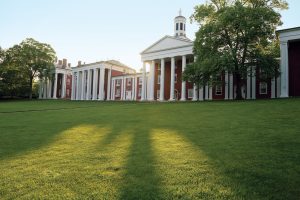 Students, faculty members and alumni have called for Washington and Lee University to change its name due to the its ties to the Confederacy, according to the Washington Post.

The institution was named after its early benefactors: George Washington and Confederate General Robert E. Lee.

More than 200 faculty members have signed a petition urging the name change, which they will present to the school’s board of trustees on Monday. Over 2,000 alumni have also offered their support. In addition, student leaders are asking for other institutional changes that include putting a stop to the “glorification” of Lee on campus, the Washington Post reported.

Previously, the institution examined its history with slavery and removed Confederate flags near a statue commemorating Lee on campus.

“For the first time ever, it seems like this effort has momentum,” said Trent Merchant, a Washington and Lee University alumnus, to the Washington Post. “We want to remove an obstacle that is standing in their way.”

Harvard Taking More Steps to Acknowledge its Ties to Slavery