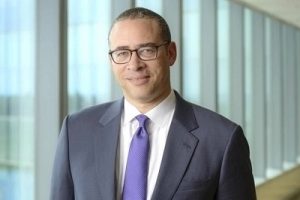 “The reason we’re not going to change the name is that names have value that exceed someone’s existence,” Holloway said at his first press conference on Monday. “If I were to walk around feeling bludgeoned by every name I see, I couldn’t get out of bed.”

The school also has three halls named after former presidents who owned slaves, which students have been petitioning to change in the wake of national anti-racism protests.

Before being tapped for the Rutgers presidency, Holloway was provost of Northwestern University and was previously the dean of Yale College and Edmund S. Morgan Professor of African American Studies, History, and American Studies at Yale University. He’s the author of “Jim Crow Wisdom: Memory and Identity in Black America Since 1940.”

“My existence, my humanity, my complexity, cannot be reduced by the fact that Rutgers was a slave owner, that he could not imagine me,” he said. “That’s his problem.”