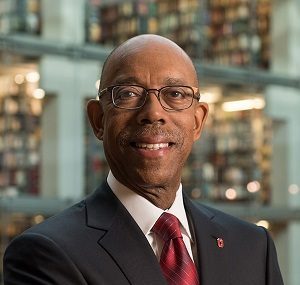 A UC news release notes that, excepting his time as Ohio State president, Drake’s entire academic career has been at UC, including as chancellor of UC Irvine from 2005 to 2014 and as the systemwide vice president for health affairs from 2000 to 2005. Drake will succeed UC President Janet Napolitano, who announced in September that she would leave UC in August 2020.

“We are thrilled that Dr. Drake has chosen to return to UC at this pivotal moment in the midst of profound global and national change,” said Dr. Kum-Kum Bhavnani, chair of UC’s Faculty Academic Senate and the Academic Advisory Committee, in a statement.

“President-designate Drake’s demonstrated commitment to undergraduate and graduate students and the work of faculty, understanding of the needs of UC employees, his commitment to social mobility, and his intimate insights into diversity, policing and inclusion ensure UC will continue to be a leader in higher education nationally and internationally as the world enters a bold new era,” Bhavnani added.

In a statement, John A. Pérez, chair of the UC Board of Regents, said, “As the first person of color to serve as UC president, Dr. Drake returns to UC at an important point in the University’s journey. This is a homecoming the University of California is very excited to be celebrating early.”

Plaudits are already coming in from outside the UC system as news broke of Drake’s appointment yesterday evening.

“Michael Drake will be an exceptional President of the University of California System,” said Association of Public and Land-grant Universities President Peter McPherson in a statement. Drake “has the experience, savvy, and integrity needed to advance the mission of the system. He is also deeply committed to student success as well as diversity, equity, and inclusion.”

In a statement, Michele Siqueiros, president of the Campaign for College Opportunity, says that Drake comes to the UC presidency “with a remarkable record of being unabashed in supporting access, completion, and racial equity.” Siqueiros added, “We applaud the UC Regents for their diligent work to identify and select a president who understands the urgency to improve access, transfer, and graduation rates at UC and who we expect will close persistent racial and ethnic gaps in student outcomes.”

Drake received his A.B. from Stanford University and his residency, M.D. and fellowship in ophthalmology from UC San Francisco (UCSF). He subsequently spent more than two decades on the faculty of the UCSF School of Medicine.

The UC System Just Admitted Its Most Diverse Class of Californians. How Did These Campuses Do It?