Though his mother did not attend college, the importance of education was always ingrained in Dr. Lynden A. Archer’s head.

Growing up in Guyana, his older brother received a scholarship to Columbia University, where he eventually worked his way up to earning a doctorate in mechanical engineering.

“That set the stage for everyone,” says Archer, the James A. Friend Family Distinguished Professor in Engineering at Cornell University. “So, we all more or less followed in lockstep.” 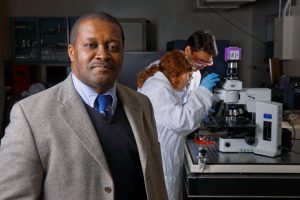 During his senior year of college, Archer applied to the University of Southern California. He became one of two students accepted as part of an international merit scholarship.

“They had the vision of recruiting up to two international students each year with full tuition scholarships as a way of simultaneously increasing the intellectual strength and diversity of the engineering student pool,” he says. “I was totally flattered that I was one of the first two students selected to receive this honor.”

Shortly after, he went on to earn his doctorate degree in chemical engineering at Stanford University.

While at Stanford, Archer attended a talk by Dr. Ronald G. Larson, who, at the time, was working at AT&T Bell Laboratories.

“I told one of my lab mates that my greatest wish would be to work as a postdoctoral fellow under the guidance of Dr. Larson, not knowing that my Ph.D. advisor who is a proactive, engaged mentor would ultimately help me realize that dream —  it was just terrific to be able to spend a year as a postdoc at Bell Labs.”

After graduation, Archer worked as a postdoctoral member of the technical staff at AT&T Bell Laboratories for a year. He describes his experience as one of the “high points” of his career.

“It was historically considered a sort of think tank of the best and the brightest minds in engineering and the physical sciences,” he adds. “And it was the aspiration of every up and coming engineer to have an immersion in that environment. It is remarkable that I had the chance to complete my postgraduate education at the Labs. So that was truly a critical moment and I made the most of it.”

Archer transitioned to Texas A&M University, where he taught in the chemical engineering department for four years.

In 2000, Archer arrived at Cornell to work as the director of the School of Chemical and Biomolecular Engineering.

In the fall of 2017, he was appointed director of the Cornell Energy Systems Institute.

Archer’s research has focused on topics such as fluid dynamics and rheology, energy systems and nanotechnology. All of which have been featured in academic journals.

Over the years, he has earned a number of accolades and honors including the James and Mary Tien Excellence in Teaching Award and AIChE Nanoscale Science and Engineering Forum Award.

Archer has also enjoyed time in the classroom. This past semester, he taught a mathematically intensive course about fluid mechanics to students in their sophomore year.

“It is an interesting course because I get to meet students at all levels of preparation, quite early in their undergraduate experience,” he says. “Honestly, to enable students to make the most out of my fluid mechanics course I must begin with exercises that have the effect of equalizing student backgrounds in mathematics. This aspect also gives me a chance, I think, to see firsthand the mathematics preparation of students entering the program from a diverse set of high schools.”

Archer will bring some of his teaching experiences into his new role as the Joseph Silbert Dean of Engineering. He will start his five-year term July 1.

“[My class has] given me some initial ideas about how to perhaps engage the high schools these students are coming from to ensure that our undergraduate student body in engineering isn’t just among the most diverse in the Ivy League, but that the diverse students who matriculate in Cornell Engineering come to us really well prepared to excel,” he says. “I believe that this is one of the keys to creating an intellectually rigorous learning environment in which students felt like they totally belong.”

He plans to strengthen ties between departments and build relationships between Cornell’s Ithaca and New York City campuses under the “One Cornell Engineering” initiative.

Additionally, Archer wants to diversify the undergraduate population and faculty, make “strategic investments in people and programs” and “modernize infrastructure for research, teaching and technology translation.”

“We’re the modern engineer,” he adds. “The engineers who’re not just responsible for discovering new laws and teaching our students new things, but also for translating the new discoveries into products that have societal impact. That’s a growing, but very important priority.”