Two days after the death of George Floyd — a Black man who died at the hands of a Minneapolis police officer — University of Minnesota President Joan Gabel made an announcement: The university is breaking its ties with the Minneapolis police department. The city department can no longer provide security at campus events or be called on for specialized services like K-9 explosive detection.

“I write to you to express our overwhelming sadness, and our demands for accountability and justice,” Gabel’s statement read. “Our campuses and facilities are a part of the communities in which they reside. University students, staff, and faculty are day-to-day participants in the life of every community in this state, and we must act when our neighbors are harmed and in pain.” 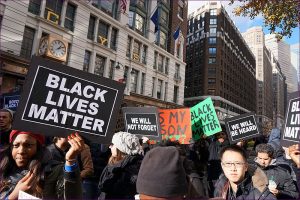 The move came after Jael Kerandi, the school’s first Black student body president, sent a letter to the administration, detailing the history of racial violence in Minneapolis policing and demanding a separation from the city department.

“A man was murdered,” Kerandi writes. “It is our job as an institution to exert whatever pressure we can to keep our students safe and demand justice in our city and state.”

Her call to action was just the beginning. Now an avalanche of student movements are urging universities to separate from metro police and reform campus policing practices — or abolish university police departments altogether.

At Ohio State University, both student government and faculty sent letters urging the school to disassociate from the Columbus police department. Similarly, student groups at the University of Louisville, Georgetown University, Northwestern University, Columbia University, New York University and others have created petitions to cut ties with city police, garnering thousands of signatures. 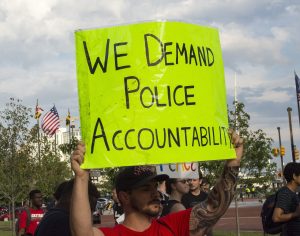 A letter signed by students, student groups and faculty members in the University of California system asked the institution for “an end to all university contracts with police on our campuses, the abolition of their departments, and the redistribution of their resources to provide for community members in need.”

Some universities are responding to student pressure for police reform. John Hopkins University, for example, suspended its plan to establish an armed police unit for at least two years to consider other approaches to public safety, according to The Baltimore Sun.

For Dr. Charles H.F. Davis, assistant professor of clinical education at the University of Southern California, universities are “microcosms of society,” so the “critical” question underlying these student movements is the same as that at the heart of the national protests. Protesters are really asking “why we’re so invested in this notion of accountability only looking like discipline, and discipline only looking like punishment — and why that disproportionately affects Black and brown people, on campus or elsewhere.”

“Who are you protecting?” he asked. “Who has a right to use this public service as it were?”

The relationship between higher education and policing is old, extending back to 1894 when Yale University established the first campus police department. (Now Yale University students are among those protesting for their department’s abolition.) These police units have traditionally been called on by universities to address everything from violent crimes on campus to noise complaints to student protests, with varying partnerships with city police as back-up law enforcement.

According to Dr. Christopher Tinson, director of African American studies at Saint Louis University, scrutiny of campus police isn’t new as students have been questioning their role in campus protests for decades.

He described clashes between campus police and Black student protesters when he was in college in the 1990s.

“Many of us had been either arrested or treated negatively and aggressively by campus police and city police while on our campuses,” he says. “Basically, every student struggle you could point to historically, particularly in the 1960s, would involve a question of why do we need campus police.”

For decades, campus police have been used “to disrupt, to threaten, to bully and to 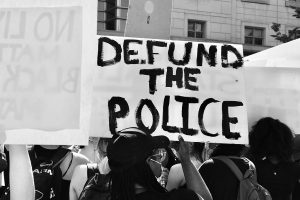 use force” against student protesters, rather than to “deescalate or support,” he added, while university administrators have been “complicit.”

University officers have also long been a source of campus climate problems, says Davis, with campus police not infrequently asking Black students to show ID or otherwise questioning their student status. He pointed out that campus climate studies show that interactions like these — where students of color need to prove they belong on campus — impact their academic success and their chances of staying enrolled.

In higher education, “think about all the debate we have on retention, attrition, college completion around Black and brown students,” Davis says. “We’ve looked for every explanation other than racism to describe the racial disparities that we see.”

Another part of the conversation is cost. Campus police departments come at a high price, a theme in student petitions to remove them. On average, institutions spend $2.7 million on campus policing, according to data from the Bureau of Justice Statistics.

That’s why Davis thinks a “divest, reinvest framework” — putting policing funds toward student supports — is the least a university can do, in addition to cutting ties with city police departments.

“When you think about what $2.7 million could do for an institution — in a moment where people are being furloughed and laid off, when we constantly say to students of color we don’t have the money to build you a cultural center or hire appropriate staff …” he says, “ it’s hard to rationalize [neglecting] things that should be a bare minimum to an educational experience when you’re spending millions of dollars on law enforcement.”

An advocate for police abolition, Davis argues one of the biggest misconceptions about the movement, on campuses and otherwise, is the idea that abolition means removing police and leaving a vacuum in its place, when the goal is to funnel supports to address the root problems police handle.

“We want to create the conditions that make police obsolete,” he says. “When we just give people the things that they need, they don’t have to do the things that put them in a situation to make bad choices ….”

He worries that incremental reforms are “the quickest way to extinguish revolution” at a time when universities need lasting change.

At the same time, campuses will be forced to contend with parents who are comforted by the presence of officers, says Tinson, based in a societal “social dependency” on police where they’re assumed to be the ideal providers of all kinds of services.

At a minimum, he’d like to see a shift in how campus police departments are trained to think about their roles. Often, police don’t “feel they’re a part of the academic mission of the school,” he says, instead viewing themselves as responsible for “keeping order,” a job description subject to wide interpretation, meaning a lot can go wrong.

While universities might be tempted to skirt the issue and replace police with private security firms, for Tinson, that’s not a solution. Outside security poses the same risks to students of color plus “lack of oversight.”

As a basic step, he also advises universities to be “very explicit” about their relationships with police so that students, parents and faculty can give input about the public safety strategies they want.

Ultimately, Tinson sees this as “a beautiful moment” for people who have been calling for “drastic reforms” for years.

Though people “get scared” by the term, student calls for campus police abolition aren’t about “anarchy,” he says. “Abolition is not so much about what you take away. It’s about what you invest in. The question is, are you going to reinvest in our thriving? Are you going to do the things that actually produce our wellbeing, from therapeutic services … to who has access to these campuses to how the space is shared? That’s what we’re talking about.”