The University of Texas at Austin (UT Austin) on Monday said it will retain its controversial “The Eyes of Texas” school song and the statue of segregationist James Hogg, but it also announced a host of measures aimed at making its campus “more diverse and welcoming” after the institution’s Black athletes campaigned for over a month demanding such changes. 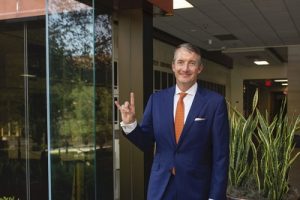 Among the changes announced:  Renaming Joe Jamail Field at its football stadium to honor two Heisman Trophy winners, Earl Campbell and Ricky Williams; building a statue for Julius Whittier, the Longhorns’ first Black football letterman; commissioning a new monument on the East Mall to honor the first Black undergraduates to attend the institution; removing the name of Robert L. Moore, a mathematics professor who didn’t allow Black students to take his class;  and building a statue of Heman M. Sweatt, a Black man who was refused admission to the university’s law school.

The school song will remain, but “we can effectively reclaim and redefine what this song stands for by first owning and acknowledging its history in a way that is open and transparent,” said Dr. Jay Hartzell, the university’s interim president, in a statement. As for Hogg’s statue and any other structures that won’t be renamed, the university will aim to educate visitors and students about these monuments through plaques or a website.

The university also announced several measures to recruit, attract, retain and support diverse students, faculty and staff. Among other measures, UT Austin will allocate a multimillion-dollar investment from athletic revenue to university programs that support Black students and it will refocus and sharpen the implementation of its Diversity and Inclusion Action Plan.

Baylor Settlements Could Signal Trend of More to Come

UConn not Sanctuary Campus but Will Help Immigrant Students