John Robert Lewis, civil rights icon and longtime Congressman, died on Friday after a six-month battle with cancer. He was 80. 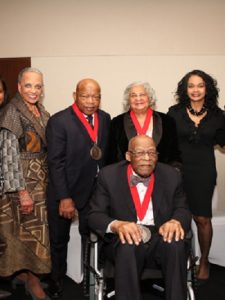 Lewis was revered for his historic participation in civil rights marches and for his leadership of the Student Nonviolent Coordinating Committee. He was beaten and jailed for his activism in the 1960s but remained firm in his avowal of nonviolence. As a U.S. congressman, he was known for his humility but also his bold leadership on issues to do with equity and social justice.

Lewis’ death was announced by his family as well as House Speaker Nancy Pelosi.

“It is with inconsolable grief and enduring sadness that we announce the passing of U.S. Rep. John Lewis,” his family said in a statement, reported CNN. “He was honored and respected as the conscience of the US Congress and an icon of American history, but we knew him as a loving father and brother. He was a stalwart champion in the on-going struggle to demand respect for the dignity and worth of every human being. He dedicated his entire life to non-violent activism and was an outspoken advocate in the struggle for equal justice in America. He will be deeply missed.”

In her statement, Pelosi called Lewis a hero.

“Today, America mourns the loss of one of the greatest heroes of American history: Congressman John Lewis, the Conscience of the Congress,” Pelosi said.

Lewis, a Democrat who served as the U.S. representative for Georgia’s 5th Congressional District for more than three decades, announced on Dec. 29 that he was diagnosed with Stage 4 pancreatic cancer. He said at the time that he would fight the disease and continue working while undergoing treatment.

“I have been in some kind of fight — for freedom, equality, basic human rights — for nearly my entire life,” he said in a statement. “I have never faced a fight quite like the one I have now.”

Lewis was a recipient of the 2017 John Hope Franklin Award from Diverse. At the time, speaking at the awards ceremony, Lewis urged those in attendance to continue to fight the good fight for social justice.

“Now, more than ever, we need to get in good trouble, necessary trouble, and speak up for education, health care, for all our children, for the women,” Lewis said.

At a time when the COVID-19 pandemic has laid bare the stark racial inequalities in the healthcare system, Lewis’ words continue to resonate.

Lewis was born in Alabama to impoverished sharecroppers. He was drawn to activism in 1955, when he was a high school student,  after hearing broadcasts by Rev. Martin Luther King Jr., said The Washington Post.

“I first met John when I was in law school, and I told him then that he was one of my heroes. Years later, when I was elected a U.S. Senator, I told him that I stood on his shoulders,” former President Barack Obama wrote in a eulogy. “When I was elected President of the United States, I hugged him on the inauguration stand before I was sworn in and told him I was only there because of the sacrifices he made.”