Dr. Gurtina Besla, associate professor of astronomy at the University of Arizona, says getting a career or standing out on a graduate school application goes beyond what is taught in the classroom.

“You can walk through your entire degree and do great in your classes, but it doesn’t mean that you’re going to walk out and get a job in a second,” she adds. “There is an extra step in there, which is that you have to go and start putting your resume together.” 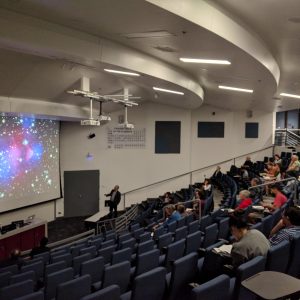 However, not every student, especially those who are first-generation, knows that.

“Students don’t walk in on a level playing field,” says Besla, who is also the associate astronomer for the Steward Observatory at the University of Arizona.

To address those accessibility gaps, Besla developed the Tucson Initiative for Minority Engagement in Science and Technology Program (TIMESTEP) in the spring of 2015.

The professional development program, which convenes twice a month over pizza and tamales, offers opportunities in astronomy, physics, mathematics, optical sciences, engineering and computer science. Undergraduate students hear from speakers within the field and receive mentorship from faculty members. Past speakers include Dr. Keith Hawkins, an astronomer, and Dr. Jorge Moreno and Dr. Enrico Ramirez-Ruiz, who are both theoretical astrophysicists

Though the program is open to anyone, it aims to support minority students. Around 100 students attend sessions throughout the year and half of participants are students of color, according to the university. Many speakers come from diverse backgrounds as well.

“The people they are seeing speaking to them are from very diverse backgrounds,” says Besla. “Our basic principle is that everybody needs these kinds of development programs, but those coming from underprivileged backgrounds are going to need it more. So, everybody gets the same information, but you elevate those that really need it.”

There is also a focus on discussing unconscious bias, stereotypes, diversity and race within academia and the workforce.

During the beginning of the fall semester, the program is geared towards freshman and sophomore students with older students who offer peer mentoring support. By the end of the semester, discussions shift to graduate school applications. The spring semester revolves around research program applications for the summer.

“The programming varies and accounts for all the different groups of students you have in one academic year,” says Besla.

The impact of COVID-19

Due to the COVID-19 pandemic, after the switch to online learning, meetings were conducted over Zoom for the rest of the spring semester.

Among freshmen in fall 2016, 68% of those who participated in TIMESTEP were 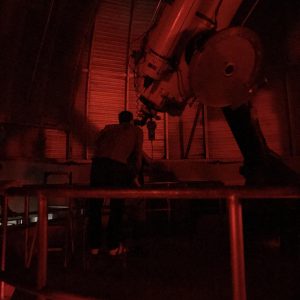 retained within College of Science majors three years later, compared to 45% of their peers, according to the university.

“Without TIMESTEP I don’t think I would’ve realized the importance of building good relationships with professors or how important it is to do summer research, for example,” she says.

Kaylah McGowan, an applied physics major at the University of Arizona, had an interest in pursuing research but did not know where to start until she became involved in TIMESTEP.

“It has given me a new level of confidence when I come into a room or if I go into an interview,” she says. “I feel like I have a one up on some people who might not have that experience and also just gave me experiences I wouldn’t have had otherwise.”

Now, she is participating in the summer internship program. McGowan was placed at a company based off her interests and is currently making computer-aided design models for NASA proposals.

Prior to the start of her internship, TIMESTEP offered opportunities for mock-interview sessions and resume workshopping.

“I feel like I’m ready to apply for real jobs,” she says. “That was definitely the most valuable experience I’ve had so far. Also, getting involved in a real work environment, the checks and balances and accountability.”

Additionally, throughout the internship, there are weekly check-ins to discuss overall progress or concerns.

With the University of Arizona being an Hispanic-serving institution, Besla, alongside graduate student Nicolás “Nico” Garavito Camargo, looked to cater to the student body and the outside Tucson community by developing Astrocharlas, a public talk series.

The talks, which are entirely in Spanish, are hosted at the Steward Observatory on campus once a semester and are open to the public.

Between 40 and 50 students attend the sessions, which are led by Spanish-speaking faculty and postdocs within the astronomy field.

“We need to build community and help engage our Hispanic students in the discipline,” says Besla. “And this is a way that we found is actually working to do that. So, you know, a lot of these programs, it’s not just about giving a talk. It’s also about understanding your community and building community.”

Stephenson says this program allowed her to meet people who shared a similar background to her.

“It definitely made me feel more connected to the department and gave me a sense of belonging,” she says. “I hope the public felt the same way. I hope that sense of community and belonging was transmitted to the public so that the university and astronomy feel more friendly and welcoming to anyone from any background.”

The talk also brought Spanish-speaking faculty into the “light,” according to recent University of Arizona graduate Jose Angel Perez Chavez.

“If a faculty member spoke Spanish, I would be able to connect with them in more ways than a lot of other faculty members that are mostly White, specifically both in physics and astronomy,” he adds.

While interacting at the public talk series, students developed relationships that evolved into creating astronomy study groups and seeing each other outside the classroom.

“I’ve never had that before, specifically in astronomy in academia,” says Chavez. “It’s very refreshing.”

Oftentimes, Chavez felt that he had to put a “mask on” because he didn’t speak Spanish in the astronomy department.

“In a way, having this space with peers, who not only speak Spanish but I know they are from Latino-American communities, it is just very welcoming,” he adds. “I consider it a safe space that is being put out there in the department by us so that students like myself can come out and just be themselves.”

In the future, Besla wants to expand the Spanish-speaking talk series to include other science disciplines outside of astronomy.

This article originally appeared in the July 23, 2020 edition of Diverse. You can find it here.