In 2018, he became the institution’s first African American full professor in engineering, also serving as associate dean for academic success for the engineering school and the interim vice provost for strategic initiatives. Now, he’s taking on a new role as Vanderbilt’s vice provost for academic advancement and executive director of the Provost’s Office for Inclusive Excellence. 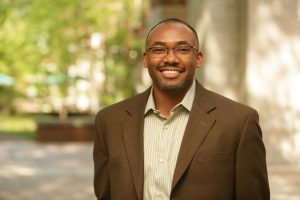 “His leadership is critical to shaping our community’s action as we chart a path forward to continue to fight racism and injustice,” said Dr. Susan R. Wente, Vanderbilt’s interim chancellor and provost, praising Robinson for his “wide-ranging expertise” and “proven track record of transformational leadership.”

Robinson looks forward to drawing on his years of institutional knowledge in his new position. He’s already been an active part of efforts to take a long look at Vanderbilt’s “historical gains and areas that it needs to improve in terms of diversity and inclusion” and make “recommendations on the path going forward for the vision of the institution.”

“Now I’m in a position where I can actually try to implement some of those recommendations,” he says.

Going forward, Robinson will continue to lead the Academic Pathways program, which prepares diverse doctoral program graduates for entry-level academic positions, with the hope that they’ll stay at Vanderbilt. He’ll also help develop new supports for first-generation and low-income students and continue to work with the university’s four identity centers: the Bishop Joseph Johnson Black Cultural Center, the Office of LGBTQI Life, the Margaret Cuninggim Women’s Center and the Office of Religious Life.

He plans to put an emphasis on not just recruitment but the retention of minority scholars and graduate students, crafting an internal handbook on diverse hiring practices with stories and feedback from current Vanderbilt professors.

Robinson draws inspiration for his diversity work in part from his engineering background. He’s been honored for his engineering research as the recipient of a National Science Foundation Faculty Early Career Development (CAREER) program award and was selected for the Defense Advanced Research Projects Agency Computer Science Study panel, among other accolades.

He paired — and continues to pair — his STEM work with efforts to diversify the field. He was a part of the chancellor’s committee for diversity, equity and inclusion and won a chancellor’s award in 2016 for his work supporting diversity in engineering. He also co-leads the Explorations in Diversifying Engineering Faculty Initiative, in addition to co-editing a book titled, Diversifying STEM: Multidisciplinary Perspectives on Race and Gender. His work looks at the “lived experiences” of Black STEM faculty, which remind him of his own experiences in Vanderbilt’s engineering school.

“In 2018, to be the first, while perhaps that’s a great personal achievement, it still means we need to move forward and ensure there’s a second and a third and a fourth,” he says.

Robinson’s co-editor, Dr. Ebony McGee, an associate professor of education, diversity and STEM at Vanderbilt, expressed her appreciation for his support for STEM faculty of color. She met him as a second-year assistant professor.

When he reached out about embarking on a project together, it “instilled a lot of confidence in me,” she says. “It made me feel really good that someone of his caliber reached out to me.”

Robinson traces his career shift from scientific research to campus leadership back to a memorial service for Dr. Scott Wills, his dissertation advisor at the Georgia Institute of Technology.

As he listened to testimonies by students and colleagues touched by Wills’ work, it was an “inflection point,” he says. It inspired him to go beyond his computer and electrical engineering background and later embrace opportunities “to serve and have a positive impact.” He saw that his work could go farther, making institution-wide change and leaving a mark on higher education more broadly.

It was a moment when “I really thought about my own legacy,” he added.

As the coronavirus pandemic magnifies disparities and antiracism protests continue across the country, Robinson begins his role at a pivotal moment.

“In this time of elevated Black death, in a time that the world is talking about structural and institutional racism, he has a real opportunity to make impactful, structural, foundational changes … that would make education better for all those who step on [Vanderbilt’s] campus,” McGee says.

He and his colleagues are thinking about what it means to have conversations about inequities as a community, from classrooms to research labs to the campus’s wider metro area.

And one day, when he looks back on his legacy, he hopes he can say that he was “able to move Vanderbilt to a place where people truly belong …,” he says. He wants the university to “be a positive experience for everyone where they can grow, [where] they can maximize their academic success and advancement and they’re able to really feel like their experience at Vanderbilt was valuable — no matter what role that they have.”

This article originally appeared in the July 23, 2020 edition of Diverse. You can find it here.

Thousands of Scientists Went on Strike Wednesday to Protest Racism in STEM, Academia