Dr. E. Walter Miles, a groundbreaking Black political scientist at San Diego State University, died at age 86 on July 8, the Los Angeles Times reported. The activist and academic spent more than 30 years at the university, where he specialized in the U.S. Constitution. 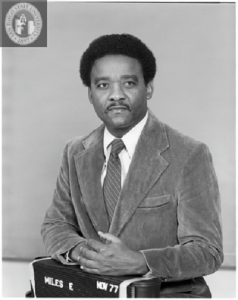 He participated in social justice initiatives throughout his career, heading the American Civil Liberties Union and Urban League chapters in San Diego and fighting for more recruitment of diverse faculty.

In the 2019 book The Black in Crimson and Black: A History and Profiles of African Americans at SDSU, Miles is described as “The Godfather of Black Faculty” and “a natural politician who was a master at getting things done behind the scenes.”

“That’s what he was about,” one of his sons, Tony Miles, told the Los Angeles Times. “He wanted to create change so that people coming along after him would have it better.”