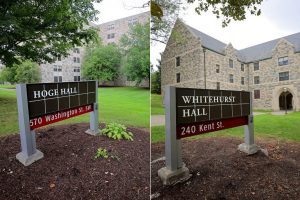 Hoge Hall is named for Janie and William Hoge, a local African American couple who fought for Black students’ rights to be on campus. The couple, both born to formerly enslaved parents, hosted Black students who were denied on-campus housing at the time.

“Their care and support of these students played an essential role in facilitating the beginnings of African American enrollment at Virginia Tech,” the university said in a statement.

Whitehurst Hall is named for James Leslie Whitehurst Jr. who became the first Black student permitted to live on campus in 1961. He later became a fighter pilot with the U.S. Air Force in Vietnam, a major in the Air Force Reserve in Virginia and  a member of the Air National Guard.

“The previous names on these two residence halls — the temporary homes of many of our students of color in recent years — were inconsistent with the rich heritage and increasingly diverse community that is Virginia Tech,” said Dr. Tim Sands, Virginia Tech’s president, according to WSLS.