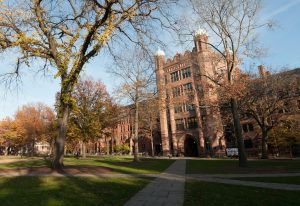 their race, whom it otherwise would admit,” the Justice Department concluded, saying that Asian American and white students have “only one-tenth to one-fourth of the likelihood of admission as African American applicants with comparable academic credentials.”

The investigation also said that Yale considers race in multiple steps of the application process and that it “racially balances” its classes. In response, the Justice Department “has demanded that Yale immediately stop and agree not to use race or national origin for upcoming admissions,” reports the AP.

Yale, on the other hand, “categorically” denies the allegations, calling them “meritless” and “hasty.” In a statement, the university said it considers “the whole person when selecting whom to admit among the many thousands of highly qualified applicants.”

“Given our commitment to complying with federal law, we are dismayed that the DOJ has made its determination before allowing Yale to provide all the information the Department has requested thus far,” the university said in a statement. “Had the Department fully received and fairly weighed this information, it would have concluded that Yale’s practices absolutely comply with decades of Supreme Court precedent.”

In 2018, the Justice Department  raised similar allegations against Harvard University, saying it engaged in “outright racial balancing” and discriminated against Asian American students. But, in 2019, a federal judge cleared Harvard of those allegations. That ruling, however, has been appealed, with arguments scheduled for next month.

According to the AP, in the past, the Supreme Court has ruled that colleges and universities may consider race in admissions decisions, with the caveat that it be done narrowly to promote diversity and be limited in time. Yet, the AP notes, past rulings have also given “wide latitude in considering a wide range of factors, including race, as they build their classes.”

Commentary: A Finding in Search of an Explanation

No Excuse for Invoking Hitler’s Name When Criticizing Opponents