The U.S. African American Redress Network was created when the Thurgood Marshall Civil Rights Center at Howard University and the Institute for the Study of Human Rights at Columbia University teamed up to spotlight the numerous local reparations initiatives across the nation and be a resource in support of such efforts. 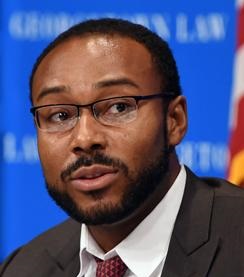 Howard University law professor Justin Hansford serves as the executive director of the Thurgood Marshall Civil Rights Center and he spearheaded the Redress Network along with Dr. Linda Mann, who spearheaded the project on behalf of the Institute for the Study of Human Rights.

“We’ve talked about reparations for slavery or for Jim Crow … or reparations for the war on drugs and mass incarceration. What we are doing to ensure that mass incarceration is not going to happen again? To assure that police violence is not going to happen again?” Hansford asked. “So some of that involves policies, in addition to the money, some of it will involve laws to really get to the healing,” he added.

Given the work the Thurgood Marshall Civil Rights Center has done on the reparations issue, Mann says it was the right choice for Howard and Columbia to join forces.

Given the racial unrest that has surfaced after the killings of Ahmaud Arbery, Breonna Taylor, and George Floyd at the hands of local law enforcement officers, Hansford thinks now is the right time to address the issue of civil injustices towards African Americans in this country.

“We’ve seen people respond in a way that we might have never seen in the history of our country, starting with the protests. They weren’t magically out there,” said Hansford. “And then you look at the corporations speaking out … the athletes speaking out. And we love seeing people make their opinion known that there’s a racial justice problem and they want to be a part of the solution.”

With the protests now taking place in other countries, Hansford also thinks that this is the right time to address redress on the international level as well. In October 2019, Hansford testified before the United Nations on the reparations issue. The reparations conversation is not a new subject for the U.N., there have been a number of reparations initiatives across the globe, including in South Africa, Chile, and Israel.

Among the reparations movements developed in conjunction with the U.S. African American Redress Network is the push to redress the generational injustice that happened to the people of Prince Edward County in Virginia in 1959. Davis v. County School Board of Prince Edward County, a case the U.S. Supreme Court eventually folded into the Brown v. Board of Education verdict, involved thousands of Black children denied the right to attend school for the five years Prince Edward County officials refused to appropriate funds for public schools in protest of school integration. The Redress Network collaborated with county leaders to offer a scholarship to the descendants of those who suffered injustice during that integration struggle. Additionally, the victims received an apology from state and local governments and a memorial was built to commemorate that historical event. The work of the Redress Network has also led to the removal or renaming of statutes, bridges, and street names of Confederate officers in Durham, North Carolina, Ellicott City, Maryland, and Atlanta, Georgia.

The Redress Network supports H.R. 40, a U.S. House bill sponsored by Rep. Shelia Jackson Lee titled, “Commission to Study and Develop Reparation Proposals for African Americans Act.” However, the Redress Network is not in favor of obtaining reparations on the federal level. Though such actions could give Black people what they would consider their “40 acres and a mule,” promised to the freed slaves during Reconstruction, Hansford thinks approaching reparations on a local level is the way to go.

Hansford said that “it’s not just about the financial aspects, we’re in a very capitalist society, that people take terms of finance first and foremost, in all aspects of their lives. I think that’s a big mistake. I think we have to heal and we have to get our stories told in order to heal. And we need to do that in a much more diverse, multifaceted, rich way that can be done in one fell swoop.”

The Redress Network’s website features a state-by-state list of organizations involved in the push for reparations among other resources in support of reparations efforts.