Pervasive demands for social justice following the death of George Floyd in police custody have penetrated the halls of institutions throughout the country. In academia, dozens of high-profile universities have announced plans to rename campus buildings that bear the names of individuals associated with the country’s racist history. And a similar reckoning has come to institutions that haven’t claimed the media spotlight.

At Queens University of Charlotte, a private religious-affiliated North Carolina school with a total enrollment of 2,500, the university announced on July 2 that Burwell Hall became Queens Hall after a unanimous vote by the Board of Trustees. 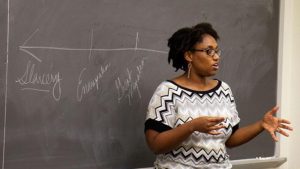 The university explained in a public statement that staff members processing archival material uncovered information about Rev. Robert Armistead Burwell and his wife Margaret Anna Burwell having ties to slavery. That discovery led Queens University President Daniel Lugo to commission a task force in 2019 comprised of faculty, staff, students and alumni, “to conduct a comprehensive examination of Queens’ historical links to slavery and its legacies.”

The task force found “clear and conclusive information describing the Burwell couple’s direct and abhorrent actions as slaveholders,” the university stated on its website. “The actions and beliefs upheld by Robert and Margaret Anna Burwell are in deep conflict with Queens’ values today,” Board of Trustees chair-elect Jeff Brown said. “Queens celebrates and embraces diversity and strives to make all students, faculty and visitors feel included.”

Dr. Marcia Chatelain, Provost’s Distinguished Associate Professor of history and African American studies at Georgetown University, who writes extensively on African American culture, says more action must be taken beyond removing names and terms that harken back to the Old South.

“I think these buildings normalize the celebration of the confederacy and they make mundane the harsh realities of the past,” she told Diverse via email.

Chatelain says renaming structures is not enough.  “I only support name changes to the extent that they are part of a holistic examination of how to transform the way that the institution operates,” she said. Chatelain posed a series of questions about the institutions’ commitment to transformation: “How are [their] workers treated? Have plans for reparations for past harms been made? Are abusive and racist people dealt with accordingly?”

A long way from Dixie

Far from the region of the United States once known colloquially as Dixie, sits a thriving public university of 11,000 students in the picturesque town of St. George, Utah. Dixie State University has been swept into the national conversation about names of edifices and institutions that pay tribute to Confederate culture. Recently, the popular musical group Dixie Chicks dropped the  Dixie and became The Chicks. But it may not be so easy for a university. 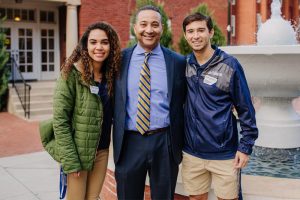 monuments, policies, names and more,” the university said in a statement provided to Diverse by Dr. Jordan Sharp, Dixie State’s vice president for marketing and communication. “In addition, we are cognizant of and sensitive to the multiple meanings associated with the name ‘Dixie.’”

According to the Utah History Encyclopedia, many of the early settlers of St. George in the 1860s came from the southern states with the intention of growing cotton, and “they also brought with them a phrase for the area which has become widely adopted — they called the St. George area ‘Utah’s    Dixie.’”

Over the years, calls have come from the state branch of the NAACP and others to change the name, and some adjustments have been made to remove symbols of the Confederacy from the campus. In 2009, the school’s nickname was changed from the Rebels to Red Storm. A statue of a Confederate soldier on horseback waving a Confederate flag was removed in 2012. But the name remained unchanged.

Although local media recently reported that university leaders are in the early stages of discussing a potential name change, no formal process has begun for a possible renaming of the institution, according to the university’s statement. Instead it stated, “The power to rename an institution ultimately lies with the Utah State Legislature, which would receive input from the Utah System of Higher Education.” The Republican-majority legislature is not expected to take up the matter until January 2021.

At the University of Oregon, the Board of Trustees in June decided that it was finally time for Deady Hall, named for Matthew Deady, the university’s first Board of Trustees president, to be renamed. After years of wrangling that included demands from the school’s Black Student Task Force and research by a group of state historians, President Michael Schill published a lengthy letter on the university’s website announcing the decision along with his commitment to build a new Black cultural center on the campus.

“We all need to be reminded that racism is insidious because it is embedded not just within the villains of history but in many of us, even those of us who go on to do great things like found a university or become federal court judges,” Schill wrote. “We need to make sure that future generations know who Matthew Deady was — a man who did great good for our state and our university, but a man who also supported causes and ideologies that were abhorrent.”

According to the historians’ report commissioned by Schill, Deady ran as a pro-slavery delegate to the Oregon Constitutional Convention in 1857 and maintained that slaves were property under the law, arguing that southerners who moved to Oregon had a right to keep their human property. In addition, he actively promoted the exclusion of free Blacks and Chinese from Oregon and urged restricting the right to vote to “pure White” men.

After receiving the report, Schill decided in 2017 not to remove Deady’s name citing a “metamorphosis” Deady had experienced as shown by his support of the Fourteenth and Fifteenth Amendments after the Civil War and acts to protect the rights of Chinese immigrants. However, the university did “de-name” another building: Dunn Hall. The historians determined that Frederick Dunn, a UO classics professor in the early 1900s, was a high-ranking “exalted cyclops” in the Ku Klux Klan.

That building was renamed in honor of DeNorval Unthank Jr., the first Black man to graduate with an architecture degree from the university.

Meanwhile, some of the nation’s highest-profile universities, where protests abound on a regular basis, are facing questions over similar issues that have gone unresolved and #GeorgeFloyd has brought them to the fore.

At Harvard University, several entities bearing names connected to slavery are being questioned, according to the Harvard Crimson. Residents of Mather House began circulating a petition in June to remove Mather’s name, which pays tribute to former Harvard president and slave owner Increase Mather, a member of the Class of 1656. According to the Crimson, a previous attempt to remove Mather’s name failed in 2017.

In addition, The Coalition for a Diverse Harvard is seeking to change the name of one of the university’s governing bodies, the Board of Overseers, because the term “overseer” historically referred to men hired by plantation owners to viciously control enslaved people.

At Michigan State University’s James Madison College, administrators recently acknowledged “that the academy has been riven by policies and practices that disadvantage People of Color.” The university announced a number of proposed steps “to hold James Madison College accountable” and to promote equity and inclusion, including plans “to reconsider the name of the college after the summer break.”

Dr. Leslie M. Harris, in the winter 2020 edition of Academe, the publication of The American Association of University Professors, chronicles institutions that have examined their ties to slavery in an article, “Higher Education’s Reckoning with Slavery.” Harris, a professor of history at Northwestern University, points out that “research, memorialization, and apologies” remain the primary ways institutions have addressed their findings and recommends that higher education institutions band together “to address the long-standing underinvestment in the descendants of enslaved people.”

Harris states, “Although many institutions are still unclear about the relationship between financial reparations and institutional transformation, the possibility for creative responses to this question has rarely been more alive than it is today.”

Getting to Know: Margaret E. Montoya