Across the country, present and past collegiate student-athletes are finding their voices on issues related to racism.

At Clemson University, former football players DeAndre Hopkins and Deshaun Watson are petitioning the university to remove the name of slave owner John C. Calhoun from the university’s honors college. Hopkins wrote on Instagram, “I am joining the voices of the students and faculty.” 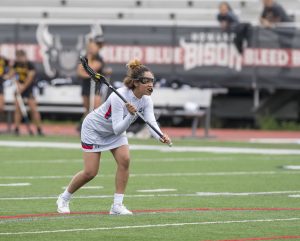 At the University of South Carolina, alumna Heather Armel started a petition directed to the university’s president, Robert L. Caslen, seeking to rename the Strom Thurmond Wellness and Fitness Center. The late senator was a vocal supporter of racial segregation and an opponent of the Civil Rights Act. More than 17,000 people have signed the petition to date, including several prominent former student-athletes.

Throughout the country, student-athletes are taking action to address systemic racism, inequality and injustice.

“Everyone around the country is waking up and decided that enough is enough, and you’re seeing this at every level in every sport,” says former NBA player Etan Thomas, author of the book We Matter: Athletes and Activism.

“We’re in a pandemic, but racism is at an all-time peak right now,” says Howard University lacrosse player Tiffany Hunt, the newly elected president of Howard’s Student-Athlete Advisory Committee (SAAC). “Student-athletes should be voicing their opinions.”

The issue of renaming

Throughout her time as a student-athlete at the University of South Carolina, track star Natasha Hastings trained at the Strom Thurmond Center. Looking back, she says she had no choice but to normalize his name being on the building. She was the first former student-athlete to post about Armel’s petition. Other athletes to sign the petition include basketball players A’ja Wilson and Sindarius Thronwell and football players Nick Johns, Gerald Dixon and Akeem Auguste.

The university says it cannot rename any buildings named for Confederate or civil rights figures, including Thurmond, because the South 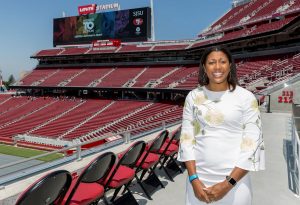 Carolina Heritage Act prevents schools in the state from making independent changes. Armel is also advocating for repeal of the Heritage Act.

“We cannot erase history and I’m not saying we don’t continue to teach history,” says Hastings, a two-time Olympic gold medalist. “Who we glorify in our history, needs to be different.

“On the one hand, they’re just the names of buildings, but on the other hand, you see how deep and how in your face this thing is.”

The deaths of George Floyd, Breonna Taylor and Ahmaud Arbery have led to protests and demonstrations across the United States. Despite concerns related to COVID-19, Hunt and her sister participated in a march near their home in New Jersey, staying to the front so they could socially distance. With most students off campus, Howard University, an HBCU, has done mental health check-ins with its student-athletes due to the stress and anguish felt by many.

“We wanted all people to feel they have a voice whether it was out in the streets or at home,” says Hunt. “I express my activism unapologetically. I’m always trying to inform people of what’s going on and not let it be swept under the rug.”

Dr. Akilah R. Carter-Francique, a sports sociologist, former student-athlete and executive director of the Institute for the Study of Sport, Society and Social Change (ISSSSC) at San Jose State University (SJSU), says, in the past, student-athletes have at times had their activism stymied by the “heavy hand of the NCAA in governing the student-athlete experience.”

On June 8, student-athletes from multiple colleges, universities and institutions around the U.S. were asked to walk, run, bike and/or swim for 8.46 miles (representing the eight minutes and 46 seconds a Minneapolis police officer pressed his knee on Floyd’s neck) with the goal of 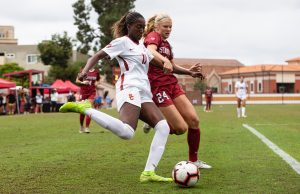 raising $1,000. Through a GoFundMe page, they raised $79,278 in donations for the Black Lives Matter movement. “Be the change you want to see,” wrote organizer Evann Smith, a soccer player at UCSB.

“They came to this on their own accord, which I think is great,” says Carter-Francique. “To see them galvanize students from not only those two institutions, but from other institutions to participate in this effort … shows students are engaged and want to do more.”

Planning for the formation of the United Black Student-Athletes Association (UBSAA) at the University of Southern California (USC) began in April and its first statement was released on June 17. The statement, directed to athletic director Mike Bohn, called for action and changes to USC’s athletic department, including promising no retaliation against student-athletes for public statements and implementing mandatory implicit bias training.

One of the main voices behind UBSAA is rising sophomore soccer player Olufolasade Adamolekun, who worked together with 2019 USC graduate Anna Cockrell. Growing up, Adamolekun participated in Jack and Jill of America, an organization dedicated to nurturing future African American leaders and strengthening children through leadership development.

“With all the recent injustices that have been going on … I thought long and hard about how I can make a positive impact especially at school,” says Adamolekun. “As an athlete, I realize the platform we have to make a difference and voice [our opinions] is huge.”

Among 12 other items, UBSAA requested that the USC athletic department publicly state support for Black Lives Matter, which was done on social media. Other actions included assurance that the Trojan Athletic Senate be inclusive and representative, that a pipeline be developed to train and facilitate the hiring of Black staff, that there be no required athletic activities on Election Day, that there be  planned events for Black History Month and funding for a minimum of two student-athletes and that one staff member or advisor attend the annual Black Student-Athlete Summit.

Hastings praises today’s student-athletes for speaking up, noting she doesn’t know if she would have had such courage as an undergraduate. While South Carolina is not an historically Black college, it does have a large number of Black students, says Hastings. “Much of [the city of] Columbia is based around the university,” she says. “It’s time that these things change.”

Thomas says he and other Syracuse University student-athlete alumni of color are forming an organization called Black Oranges, which will be dedicated to bringing about change. 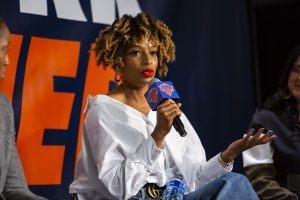 “As outlined in our mission statement, ‘Black Oranges make the pledge to use our collective influence, resources and network to inspire, unify and confront systemic oppression, racial inequalities and police brutality at our alma mater, in our respective communities and throughout the world,’” says Thomas. “We plan on being that support group that students on campus need, and we are hoping to influence other universities to formulate their own support groups across the country.”

The vice president of the Howard SAAC, Zachyre Lane, says she and other alumni from her predominantly White high school in Durham, North Carolina have started an organization called Anti-Racism Alumni. “We feel that’s a good place to start — informing students about Black history, about what goes on in the world and having those uncomfortable conversations,” says Lane.

UBSAA has already had a positive meeting with Dr. Carol L. Folt, USC’s president, related to student-athletes gradually returning to campus. “I hope we can become even more of a community and have a bigger and better bond between all the sports teams,” Adamolekun says. “We’re having great communication, which is a huge thing.”

SJSU has a long history of activism. The campus has a statue in tribute to alumni Tommie Smith and John Carlos, who famously protested at the 1968 Olympics. Carter-Francique says she and an associate director (scheduled to arrive in the fall) of the ISSSSC will be studying and writing about current student-athlete activism.

“I was initially called into the athletic department to come speak to some of the issues and how coaches could help support and engage student-athletes in managing their feelings and their desires as they relate to George Floyd, Breonna Taylor and Ahmaud Arbery,” says Carter-Francique. “The majority of those coaches are White and male and had that sort of disconnect of ‘I want to be able to support them, but I don’t know if I’m equipped.’

“I’m taking all the information right now and we are capturing it,” she adds. “We’ll be working through those files and all of the information that was gathered to begin to start writing and reporting on those things.

“My role is to continue to follow, research, write and examine, but even look to these young students … to hear from them about different ways we can disseminate this information about their lived experiences” so these students “can reach other students and galvanize generations to come.”

R. Kelly: We All Knew That He Was Coming to the Other Side of the Tracks

Student-athletes, the World Bank and the United Nations