North Carolina’s Davidson College, founded by Presbyterians in 1837, has issued a public apology for its support of slavery during the school’s first 30 years, reports the Associated Press. As part of contending with its past, the school also unveiled an “action plan” Wednesday that includes renaming buildings with connections to racist figures and strengthening its relationship with Black people in the local community.

“We have much work to do to understand the pain and injury the college has caused, as well as to appreciate fully the strength, gifts, and power of enslaved persons and our foundational indebtedness to them.” Davidson College president Dr. Carol E. Quillen said in a video 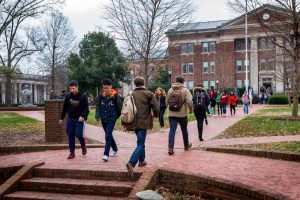 The apology is one of several recommendations by the school’s Commission on Race and Slavery, which also found that “between 1876 and 1962, Davidson College practiced racial discrimination and segregation consistent with local practices during the Jim Crow era,” reports AP. Other recommendations include the public commemoration of the contributions of enslaved people on campus and better responding to the needs of Black residents in the nearby community.

“Davidson’s foundational values include a loyalty to all of humanity,” said Alison Hall Mauzé, chair of the college’s board of trustees. “Today we are holding ourselves accountable for not wholly living up to those values during a significant part of our history and are taking strong, first steps toward building the more just and humane community we strive to be.”

Davidson College enrolls more than 1,800 students, 28% of whom are considered students of color.