When Dr. Lycurgus L. Muldrow went to college, he was reading at a 7th-grade level. He’d dealt with health issues as a kid, and like many Black students, he found himself underserved by his school system, despite both of his parents serving as faculty members at historically Black colleges and universities.

Now, after attending an HBCU himself, he serves as the executive director of the HBCU Undergraduate Success Research Center, a new initiative by Morehouse College funded by a $9 million grant from the National Science Foundation, which aims to study STEM education programs at historically Black colleges and universities. 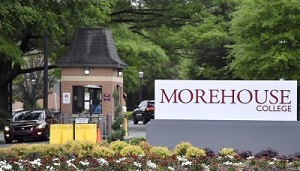 “The reality is, despite the extremely positive contribution that HBCUs make in STEM education, in the literature and in the nation, there’s still a deficit-oriented discourse concerning HBCUs’ contributions to society,” said Muldrow, also director in the Office of Academic Affairs at Morehouse.

“Through the supportive mechanism of the HBCUs, I discovered resilience,” he added.

The HBCU Undergraduate Success Research Center, otherwise known as STEM-US, will ultimately research successful STEM programs from 50 HBCUs, collecting data and ultimately sharing best practices in bringing students majoring in STEM disciplines from underrepresented backgrounds to graduation. Part of the grant will be shared with Spelman College and Virginia State University, as well.

Dr. Michael E. Hodge, Morehouse’s provost, wants to see the center become “a clearinghouse, a repository, a generator of information and knowledge and innovation” when it comes to educating Black students, he said, but also students in general. “I think that’s the legacy. This will be the center that’s pointed to as the center that created the space and scale to demonstrate the true capacity and genius in every student to be productive contributors to society.”

At the center, an interdisciplinary team of scholars will work on six different research initiatives, all “converging around” the same theoretical framework called the Phenomenological Variant of Ecological Systems Theory, or PVEST.

His own project will be figuring out how to scale a scientific literacy curriculum he developed and implemented at Morehouse and public high schools, which takes students through a simulation of a research lab, where they can see how scientific research works and develop ways to handle the anxieties that can come with feeling underprepared.

Another one of the projects, led by Dr. Danielle Dickens, a psychology professor at Spelman College, will focus on the intersectional identities of STEM students at HBCUs, addressing questions like, “A Black woman student at an HBCU that’s majoring in STEM, what is the extent to which her race, gender and even science identity integrate with one another?”

“Whether we’re looking at the barriers to retention in STEM among Black students or the successes, sometimes we forget to look within the group,” Dickens said. “So, I think it’s important to look at these intersecting identities as it relates to race but also gender and class and sexual orientation among other identities to see how all those identities impact one’s experiences in STEM.”

In addition to her project, which will be a part of the “analytic hub,” the educational research component of the center, Dickens will also be leading social science research seminars, training faculty members from other HBCUs to analyze their own STEM programs through a holistic social science lens, with the goal that scholars ultimately publish their findings.

Hodge hopes the initiative will highlight the work HBCUs are doing to encourage Black students’ participation in STEM. Morehouse, for example, is the country’s top producer of Black men who go on to earn doctorates in STEM fields. He believes all colleges can learn from HBCUs’ educational approach.

“I think it’s critically important that we approach our student from an asset-based perspective and not a deficit-based perspective,” Hodge said. “We tend to identify the genius that is within each student and ignite that genius. We don’t teach them that they need to be rebuilt in some kind of way.”

It worked for Muldrow, and he wants to see it work for future Black students in STEM, as well.

In his scientific literacy courses, he hears so many “stories of marginalization,” he said, stories where Black students realize they’re underprepared for what they want to study in college. But he and his colleagues tell them, “You have just as much intelligence, and you can grow just as much intellectually. You just got to know the work you’ve got to put in beforehand. These are all students that have great ambitions. When you tell them, this is what’s happening, this is where you are, this is the history, they rise to the occasion.”

For so many students, “that’s missing,” he said. “That takes funds, that takes commitment.”

Research Focuses on Lack of Women Authors on Graduate Syllabi