College Students Among Justice Advocates in D.C. for Historic March

WASHINGTON — Even amid a health pandemic, they came from near and far, traveling by plane, train, buses and cars to descend on the nation’s capital to call for police reform and accountability ahead of November’s 2020 presidential election.

More than 200,000 people rallied on Friday at the Lincoln Memorial on the 57th anniversary of the historic 1963 March on Washington where Dr. Martin Luther King Jr. delivered his famous “I Have a Dream” speech. This time, they came to demand an end to systemic racism in the wake of the police shootings of George Floyd, Breonna Taylor and Jacob Blake, among others. 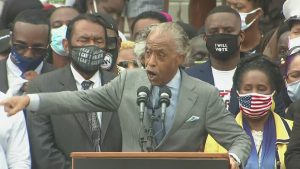 Among the protesters who flooded the National Mall were thousands of high school and college students, organized by Tylik McMillian, the national director of the youth & college division for the National Action Network, the civil rights organization founded by Reverend Al Sharpton, the organizer of the march.

“Young people understand that this moment in history is not just for ourselves, but for generations yet unborn,” said McMillian, who also spoke at the gathering. “We’re very unapologetic. We don’t come asking for permission, or negating for permission. We demand it.”

In addition to calling attention to the spate of police shootings, the crowd said that making education affordable — including doubling the Pell grant — and increasing support for historically Black colleges and universities (HBCUs) and other minority serving institutions should be a top priority for the presidential candidates.

“Students are really struggling to be able to afford college and the very basic necessities that come along with financing a college education,” said Shanice Wilson, 18, a recent high school graduate from Baltimore who will enroll in community college this fall. “For communities of color, access to education was already difficult, but I think COVID-19 has created yet another barrier and is something I think we have to address if we want to be competitive as a country.”

Aalayah Eastmond, a survivor of the Parkland school shooting in Florida and a student at Trinity Washington University said that Black shootings don’t get the national attention they deserve and pointed to the mass shooting in Southeast D.C. that killed a 17-year-old and injured 21 others as an example. “Be outraged equally for Black lives,” she said.

Equally important, she said, is that young people speak up about the ongoing police violence taking place, particularly in communities of color.

Sharpton, who announced the march during his televised eulogy at George Floyd’s funeral, said that the march was the starting point for an ongoing campaign designed to ensure change, starting with November’s election.

That message resonated with Caitlin Henry, 22, a college student from Boston who is working to get out the vote for Joe Biden and Kamala Harris over the next two months.

“When it comes to the issues that impact young people, there’s a clear difference between Biden and Trump,” said Henry, who added that she has been in ongoing discussions with her friends about the need for a national conversation on race. “Race relations are getting worse, not better, and Donald Trump rightly deserves much of the blame.”

She said that the energy from the march — including the message from Sharpton — has inspired her to remain engaged in activism.

“We could have developed and been as successful as others, but society had their knee on our neck. But we’re not going to lay and submit no more. We are not going to take it,” Sharpton told the cheering crowd who wore masks and held signs. “Some have different tactics, but we all are rising up. You going to get your knee off our neck. If we got to march every day, if we got to vote every day, we will get your knee off our neck. Enough is enough.”