John Thompson Leaves a Legacy of Advocacy and Social Justice

Coach John Thompson Jr., was not only the first Black coach to win a national championship in college basketball, but also a fierce advocate for Black and low-income student-athletes.

On Monday, news broke that Thompson, who served as head coach of the men’s basketball team at Georgetown University from 1972–99, had died at the age of 78. A member of the Naismith Memorial Basketball Hall of Fame, Thompson led Georgetown to the NCAA Championship in 1984 and two other appearances in the Final Four. 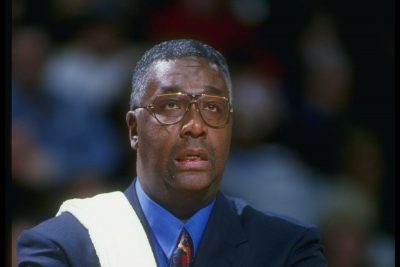 Known by many as “Big John,” the six-foot-10 Thompson coached the Hoyas to 596 wins. He is credited with turning Georgetown into a national powerhouse as well as creating the stature of the Big East Conference.

“John can be directly credited with establishing the Big East’s national profile and propelling us to college basketball’s top tier,” said Big East commissioner Val Ackerman. “His dedication to the game of basketball was eclipsed by his unabashed determination to challenge norms and call out social injustices, and we are deeply saddened that the quest for racial equality has lost one of its most powerful advocates.”

Thompson was unapologetic in his activism, championing players’ rights and protesting Proposition 48 (once pulling his players off the floor), which sought to keep student-athletes from receiving scholarship money if they hadn’t achieved the qualifying SAT score.

“He realized this had an inordinate impact on Black student-athletes and poor student-athletes,” said Dr. Ketra Armstrong, professor of sport management and director of the Center for Race and Ethnicity in Sport at the University of Michigan. “He said, ‘This is wrong and something has to change.’ He stood tall for the conditions that were disproportionately impacting the Black community.

“Not only was he successful on the court, but he also had a huge impact on social justice,” she added. “He was bold in his conviction and his consciousness. He was a Black man without apology and that’s what we all appreciated.”

Having grown up in Washington, DC, Thompson began his coaching career at Archbishop Carroll High School before getting the Georgetown job. Among the students he recruited to the Catholic university and coached were Patrick Ewing (now the men’s coach of the Hoyas), Alonzo Mourning, Dikembe Mutombo and Allen Iverson.

“When he won the championship, we all felt like we won a piece of it,” said Armstrong, a former college basketball player. “He was representing the Black community in a way that no one else had done it before.”

“He said we need to do more for these student-athletes and not deny them an opportunity,” said Doughty. “He often said sports were a means to an end. He used sports not as destination, but as a place to move you forward in your life.”

Thompson was also a voice in the now defunct Black Coaches Association.

“He inspired coaches,” said Armstrong. “I called him the consciousness because he was calling things out early to make people listen. He had values and he wouldn’t compromise—on the court, in the classroom and in the community as a steward of humanity.

Armstrong said Thompson’s legacy can be seen in some of today’s student-athlete activism, which is borne of seeds he planted decades ago.

“That was his foundation,” said Doughty, adding that Ewing’s success reflects the coaching, nurturing and encouragement that he received from Thompson. “You can’t do that without the foundation of an education,” he added.

Thompson was also inducted into the NCAA’s College Hall of Fame.

“John Thompson was an imposing guy,” said Doughty. “It was very impressive to hear that baritone voice talk about his time at Georgetown. … In three years he turned that program around and branded Georgetown. It wasn’t just that privileged school up on the hill. It was embraced by everybody across the land.”

“He challenged us to live up to our values and enabled us to see new possibilities—for ourselves and for the impact we could have on the world,” said DeGioia. “John will be remembered for many things—his historic achievements, the lives he shaped, his advocacy for social and racial justice—but perhaps most of all, for the authenticity through which he lived his life.”