Although Lt. Col. Shawna Rochelle Kimbrell officially retired from the Air Force last spring, she is still making her mark on future officers at the Air Force Academy. She is teaching physical education and is the director of culture, climate and diversity with the athletic department at her alma mater. 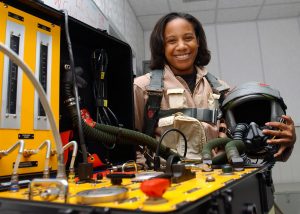 Returning to Colorado two years ago brought Kimbrell back to where she grew up and laid the groundwork for becoming an Air Force officer and a fighter pilot. As a small child, she dreamed of becoming an astronaut, but soon realized that astronauts only go into space a handful of times in their careers. On the other hand, fighter pilots fly all the time and she envisioned the freedom of flight.

Kimbrell began flying lessons as a teenager, and soon joined the Civil Air Patrol, an auxiliary of the Air Force that has three missions: emergency services, aerospace education and youth development. Kimbrell was involved in the cadet program.

Wendy Hamilton — who retired from the Air Force at the rank of Lieutenant Colonel — serves as cadet program career exploration activities manager for the Civil Air Patrol and says the Civil Air Patrol not only gives young people insight into military life but provides access to a fleet of airplanes, predominantly Cessna 172s.

“[Lt. Col. Kimbrell] would have had an opportunity to not only learn about what a leader does … but she would have gotten to practice that because once you’re in the program for a certain period of time, gone through the curriculum and done certain activities, then you are responsible for training the next set of cadets,” says Hamilton. “We do a lot of practical, hands-on applications in the realm of leadership.”

Kimbrell says she experienced leading a squadron while in the Civil Air Patrol. “I intended to get into it for flying, but when I found the cadet side, I actually found all the leadership roles that were more developmental for me at that time,” she says.

Her years at the Air Force Academy were inspiring and challenging. She graduated with a degree in general engineering. Her leadership skills were developed through “trial and error,” noting that cadets are put in situations and sometimes they succeed and sometimes they don’t.

“You build a toolkit,” Kimbrell says. “That’s how my leadership skills were built. It was definitely something I had to develop.”

After graduating from the Air Force Academy, earning her commission, being awarded her pilot wings and getting into fighter squadrons, Kimbrell immersed herself in doing her job. She was posted to the 13th Fighter Squadron in Japan and was deployed to Turkey and Saudi Arabia in support of Operation Northern and Southern Watch, making her the first African American female fighter pilot in combat. It wasn’t until she returned to the U.S. that her historic accomplishments began to receive attention.

“It was me doing what I wanted to do; I didn’t know I was breaking this barrier for five years after I had already done it,” she says. “Then I felt a lot of pressure.”

Realizing she was a role model made her self-conscious. After she matured through that, she realized she wasn’t going to please everyone and instead saw it as a door to expanding horizons for young people who envisioned new possibilities for themselves thanks to her accomplishments.

“I realized how enormous that voice was for those young kids and then it was inspirational for me to be able to go and share stories and brighten those eyes and open up a door of possibilities to those youth,” Kimbrell says.

Over the course of her military career, Kimbrell says she learned to value others and she learned about team building. According to Kimbrell, she saw that people must be able to work in their strength zones, and the biggest evolution in her leadership was taking her eyes off her own goals to be part of a team.

“What I’ve learned over the years is leading with love and helping them to find their inner strength so they can be a bigger and better part of the team,” Kimbrell says. “The way I go about things … gives people a little bit of opportunity to be themselves and to have that piece of inclusion.”

She says women need to hold every possible role in today’s military and female officers should not sell themselves short. They need to have a vision for their military careers and find 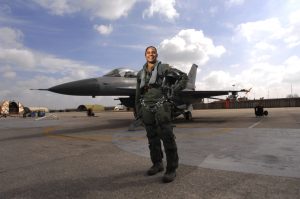 paths to their desired roles.

During the time of social distancing due to COVID-19, Kimbrell has spent a lot of time at home with her husband and two sons, ages 10 and 14. This time together helped them take a step back from constantly being on the go. Discussions about race and racism have been ongoing.

The Civil Air Patrol currently has 1,200 units around the U.S. and is largely run by volunteers, of which Kimbrell is now one. She’s working toward being able to get back in an airplane so she can show kids how to fly.

“I advise anybody — whether it’s military or non-military — to think of the biggest dream that you can think of,” she says. “What does that look like for you? Then, let’s figure out a way to get there because it’s all doable.”

While still on active duty, Kimbrell earned a master’s in business with an eye to the future after life in the military. In her job at the Air Force Academy, she wants to expand the idea of inclusivity and what that looks like in leadership.

“Personally, I’m going to seek out — probably in the next three to five years — about 100 families that I want to mentor, who want to do great things, but don’t know how to go about it,” says Kimbrell. “I want to take all the success principles … and give them access to the resources to do that.”