Honorably discharged military veterans may apply for $25,000 per year to pursue graduate studies in five schools at Vanderbilt University.

Launched in 2018 with a $25 million gift from the Lee and Ramona Bass Foundation, the Bass Military Scholars program recognizes patriotism, scholarship and leadership qualities of U.S. military veterans. Those individuals selected for this highly competitive program are called upon to engage with the Vanderbilt community and foster dialogue about military values, discipline, character and mission focus.

The first cohort of seven veterans are heading into their second year and the second cohort of nine scholars begin this fall semester. The five Vanderbilt schools participating are the Law School, the Owen Graduate School of Management, the Peabody College of Education and Human Development, the School of Medicine and the School of Nursing. Scholars must attend graduate school full-time. It does not include doctoral studies or online-only programs. Over the life of the scholarship, it’s expected that 40 scholars will complete their graduate degree programs.

“Veterans bring unique life experience to the campus,” says Lt. Gen. Gary H. Cheek (U.S. Army, retired), director of the Bass Military Scholars Program. “The Vanderbilt leadership and the Lee and Ramona Bass Foundation really value the life experience and potential that it can bring to the student body.”

Cheek’s Army experience in working on a wide range of issues with many different departments serves him well in overseeing the Bass Military Scholars Program. As director, he works with the admissions offices and deans of the five graduate schools as well as with veteran services.

“I have experience in building consensus,” says Cheek, who retired from the Army in 2018. “That certainly works well in a place of higher education, where people welcome new ideas and critical thinking.” 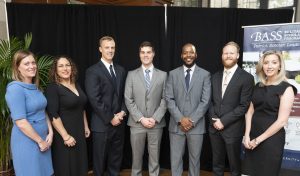 The first Bass Military Scholars Program cohort that entered in the
fall of 2019.

The scholarship of $25,000 per year complements, not replaces, educational benefits available to veterans. As a requirement, scholars must participate in two service activities per semester engaging with the Vanderbilt student body and sharing their military experiences.

“We work with organizations that sponsor leadership activities in particular, and we will align our scholars with various topics,” says Cheek. “COVID-19 has challenged us a bit. We did a virtual leadership panel last semester and we’re going to start a leadership blog this semester. We’ll have our scholars write about a leadership experience and engage in dialogue with students online.”

One topic addressed is how to be a young leader responsible for older and more experienced subordinates. Young officers often encounter that when they’re put in charge of enlisted personnel, some of whom have been in the military for a number of years. Vanderbilt students may face something similar when they graduate.

A key thing that Cheek brings to the job is his network of contacts. If the scholars have any kind of issue related to their military service, he can reach out to the Department of Veterans Affairs and help them navigate it. Upon receiving the scholarship, Cheek sits down with each recipient. Without prying, he wants to know what their personal and family needs are. This includes finding suitable housing, childcare and healthcare in Nashville. He also does regular check-ins to see how they’re doing, and, if necessary,  connects them with resources.

As each of the scholars develops an interest related to their careers, Cheek brings in mentors and helps the scholars build their networks.

“We envision our own alumni will become the major participants in the mentor program over time as we build it,” says Cheek. “One of the things we do our best is to assess with each applicant their potential to serve society after they graduate.”

After serving overseas, Devin T. Adams, a graduate of the U.S. Military Academy at West Point, spent his final years of military service back at West Point. He spent one year working to increase the number of African Americans in the applicant pool. This involved going out, finding young people who would be a good fit and recruiting them to apply. The next year, he was in charge of New York City admissions and engagement.

“I had the ability to mentor that first group of kids that I brought in,” he says. “That was really a rewarding experience for me. Having the opportunity to mentor undergrads at 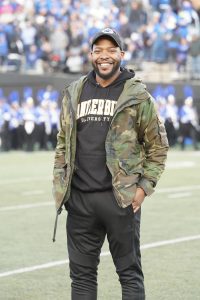 Vanderbilt is … one of the things I like about the program. The ability to have that platform to be able to speak to the undergrads about life and what’s ahead of them.”

His fellow scholars in the cohort have been like a family. One other scholar is also attending law school, so having another veteran and slightly older student (they’re about eight or nine years older than the majority of law students) provides good mutual support.

“Having the ecosystem of us all together and having the various service events and different things that we do on campus made me feel very much a part of Vanderbilt    University,” says Adams.

His military experience occasionally comes up in classroom discussions, and, outside of classes, Adams has tried to help classmates be thoughtful about their career plans. Using things his military service taught him, such as careful planning and developing expertise in specific areas, helped him know he wants to be a lawyer.

In the year between leaving the Army and beginning law school, Adams started a business running a short-term rental property management company in New York City. He is seeking the legal knowledge to carefully vet entrepreneurial prospects.

“The under the hood stuff is what I wanted to know so that I can confidently go into any of my entrepreneurial ideas,” he says. His interests include private equity — the buying and selling of companies.

In the military, Adams developed expertise in airstrikes, planes and helicopters.

“I was bringing in something from the air that’s going to affect what’s on the ground, so I really had to understand what’s happening on the ground,” he says. “I think of law school in the same way. As a businessman … it’s really good for me to know what’s going on … and all the legalities, so everything is airtight for me.”

Ken Barnes – business student with a commitment to public good

A 2011 graduate of the U.S. Naval Academy, Ken Barnes is pursuing an MBA with a desire to go into the healthcare field. Having grown up in a homogeneous farming community in Tennessee, one of the primary things he learned at the Naval Academy that carried into his military career was the value of diversity. That continues today as he interacts with his fellow Bass Military Scholars, who come from different branches of the military and have different career goals. 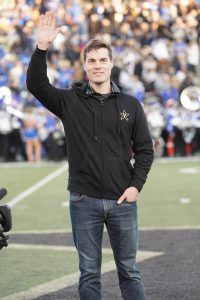 “It’s been   really neat to connect with that small group of veteran students about the stresses of leaving the military, starting an academic program, defining our new normal and new lives as we transition into the civilian world,” says Barnes, who spent eight years as a submarine officer.

The scholarship’s requirement of mentoring and community service were especially intriguing to Barnes. He has interacted with participants in the university’s Naval ROTC program. In addition to fulfilling service to the Vanderbilt community, Barnes has established a non-profit, Urban Bicycle Food Ministry. Participants load up their bicycles and deliver food, clothing and other necessities to the homeless population in Nashville.

“We ride our bicycles around downtown and serve our friends on the street. We’re able to meet them where they are and it’s a different kind of connection,” says Barnes, who called upon his military experience to handle the administrative details of setting up a non-profit. It’s also given him practical business experience.

Barnes is meeting students who’ve had little contact with members of the military, but he’s appreciative that professors welcome his input in classroom discussions. The school has an Armed Forces Club, a student-led organization for all military-connected students, which has been a resource, even directing him to change some of the military lingo in his resume.

Barnes notes that Cheek has opened his extensive professional network to each of the scholars, connecting them with people in leadership positions in their intended fields. This summer, Barnes, who is interested in healthcare and hospital administration, did an internship as an administrative resident at University of Pittsburgh Medical Center Western Psychiatric Hospital.

“I landed on hospital administration,” he continues. “I confirmed [with my internship] that several of the things I learned and did in the military are very applicable and transferrable to hospital administration. Things like leadership, relationships, being organized and being able to connect with a wide range of people are all applicable in the healthcare industry.”