William & Mary (W&M) is utilizing an anonymous $10 million gift from an alumna to establish the Veteran-to-Executive Transition program (W&M VET).

The program will focus on assisting veterans during their transition from active duty to the civilian workforce by expanding current W&M support services and offering networking and mentorship opportunities. 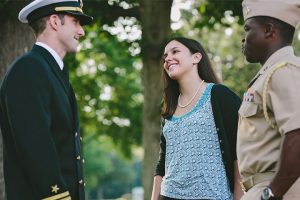 “[The donor] was interested in what we might do to help veterans make a better transition after their service,” says Dr. James R. Golden, senior consultant to the president at W&M. “Her experience was that they faced some cultural challenges in adapting from the military setting to a corporate setting. She wondered what we could do to help with that.”

Under the W&M VET program, the university plans to hire a special assistant for military and veterans affairs. An advisory board filled with executives and military veterans will also be established. Dr. Robert M. Gates, chancellor of W&M and former U.S. secretary of defense, will serve as the honorary chairman of the advisory board.

The program will also look to foster overall holistic wellness in addition to building professional skills.

Over the years, W&M has established initiatives and programs to support its student veterans.

In September 2019, the W&M Office of Student Veteran Engagement was established. The office seeks to increase the number of undergraduate veteran students and assist with their job search process.

In William & Mary’s law school, the Lewis B. Puller, Jr. Veterans Benefits Clinic works with veterans to gain access to disability benefits. The School of Education offers the Troops to Teachers Virginia Center program, which assists veterans looking to enter the teaching field through mentoring and certification. Under the school’s master’s program, there is also a veteran counseling track that trains individuals on how to work with military veterans and their families.

As part of the W&M VET, the Mason School will establish a Military and Veterans Affair Center and hire a director to lead. The center will organize all the military and veterans programs, provide resources and       develop initiatives for student veterans.

In addition to programs within the school, W&M offers Army Reserve Officers’ Training Corps (ROTC). Additionally, the alumni group, the Association of 1775,      allows veteran graduates to stay connected with the institution.

Throughout the first years of the program, the college aims to build upon those implemented programs. After researching and learning more about the needs and challenges faced by student veterans, W&M will then look to reach out to the broader military community within the Hampton Roads region in which the college is located.

More than 83,000 active duty military service members are based in the Hampton Roads region, which includes Williamsburg, Newport News, Norfolk, Hampton and Virginia Beach. Additionally, each year, 12,000 to 15,000 service members in the region leave the military, according to W&M. 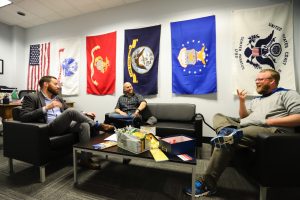 “These are people who have served their country under very trying circumstances for over the last 20 years over multiple deployments,” says Golden. “Their families have been under a great deal of stress while they are away. These are heroes. We think it is just appropriate for us to help them.”

A major cultural shift occurs during the transition from active duty member to veteran, according to Foster.

“When we change over from being, in my case, a Marine into being a veteran, you pick and choose the things that will continue to be a part of your life,” he adds. “So, I have tried to keep the parts that make sense. There is a series of decisions about that and all of that encapsulates the transition from the military.”

Foster has found that veterans’ experiences are often misunderstood by civilians. Part of that stems from military members only encompassing a small percentage of the United States population. According to the Council on Foreign Affairs, there are about 1.3 million active-duty personnel or less than one-half of 1% of the U.S. population.

“You know, they can’t possibly know because they weren’t there,” says Foster. “But what we want to do is help equip veterans to hit the ground running with their transition into really great, outstanding careers.”

Additionally, other challenges for veterans entering the workforce include developing a network of support within the private sector as well as oftentimes lacking business skills. Being a self-starter and holding entrepreneurial skills may be established during military training, according to Golden.

“They have certainly picked up leadership and management from their time,” he says. “They are very mission focused. They are real team players. They come with having that service experience. They see themselves very much as part of an integral team. But then, you know, when you get into the private sector, you sometimes need more of your own individual skills.”

In terms of the adjustment to remote learning during COVID-19, Foster has been working directly with the students to find out their needs. He currently conducts office hours virtually, where students can ask questions and express concerns over Zoom.

“That’s actually something that I will continue forever, because that seems to have really been good for my students who commute from Virginia Beach, for example, or Richmond all the way to Williamsburg,” he adds. “If it’s an hour drive and they are actually not coming to campus that day, they would probably really prefer to do a quick Zoom to ask a question or check and/or just say hello.”

Additionally, due to the pandemic, W&M is looking at virtual options for Veterans Day celebrations this year. In the past, a student veteran has traditionally rung the bell in the Sir Christopher Wren Building, the oldest U.S. college building still standing.

W&M has considered doing a YouTube live broadcast of the bell ringing to still have student veterans stay connected, according to Foster.