Colby College’s New Dean for Diversity, Equity and Inclusion Hopes to ‘Lead From the Front’

Dr. Tayo Clyburn had a deep interest in combating inequality and injustice at a young age. It would evolve into a pursuit of diversity, equity and inclusion as a career.

However, he was not introduced to higher education diversity work until graduate school at The Ohio State University (OSU). There, Clyburn had the opportunity to engage with his department’s diversity committee.

“I think over time, I just came to learn how multifaceted and embedded injustice is in every system and institution,” says Clyburn, who was recently named dean for diversity, equity and inclusion at Colby College in Waterville, Maine. “So, doing this work in higher education certainly spoke to me and let me sort of stay in my lane where I felt like I had the most passion. I had no idea that it was going to be higher ed.” 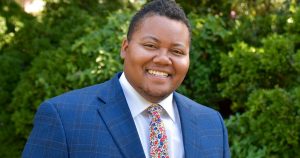 While working towards his doctorate at OSU, Clyburn became director in the university’s Office of Diversity and Inclusion. After three years, he became executive director for mission and strategic partnerships at OSU. In that role, Clyburn built relationships with university stakeholders and partners.

As part of a multi-year project, he worked on the Buckeye Portal for Inclusive Excellence, which laid out a strategic plan for the university to work towards its equity and inclusion goals. The project addressed  overall challenges of diversity and inclusion as well as how they were unique to OSU.

“I was really, really proud of that work,” says Clyburn. “I think that it will serve as an example for a lot of very large, heavily matrixed institutions, not just in higher education, but I think beyond that.”

In 2019, Clyburn became vice president for inclusive diversity and equity and chief diversity officer at St. Mary’s College of Maryland. While there, he collaborated with the Office of Student Affairs to create a more curricular approach to diversity, equity and inclusion education. Additionally, Clyburn says he helped recruit and retain faculty, employees and students from historically underrepresented backgrounds. For Clyburn and St. Mary’s, these efforts spoke “to the needs of our population.”

It was also an opportunity to “pivot our diversity education work to incorporate that,” he says. “But of course, I tried to leave that in such a way that the folks here can continue to run with this project.”

After a year at St. Mary’s, Clyburn was named dean for diversity, equity and inclusion at Colby College and began his new role on Aug.26. Beginning in this new role during a public health crisis caused by the COVID-19 pandemic and at a time of racial reckoning across the nation has been “challenging,” Clyburn admits.

“We have folks who are facing unprecedented hardship and I think the pandemic itself, even prior to the uprisings that we’ve seen across the country, was revealing structural inequalities that have had a disparate impact for generations on marginalized communities,” he says.

Colby’s desire to “lead from the front rather than the middle” in their diversity efforts, says Clyburn, is what drew him to the campus. Also appealing, he adds, was “the leadership of the institution. I think part of that is also sort of pushing the narrative out there about all the wonderful work that’s already happened.”

Looking forward, Clyburn says he wants to ensure that those outside of the campus also know about Colby’s  efforts to lead in areas of diversity, equity and inclusion. Additionally, Clyburn is looking to bring the many separate diversity initiatives that already exist together to work as a cohesive unit. At the same time, Clyburn adds, Colby is working to make college affordable and accessible to all students.

“It’s one thing that you make sure that [students] have access to the actual educational experience but also to how we are thinking about directing our research energies and our curricular energies, to focusing on some of the disparities that we’re seeing in the 21st century,” says Clyburn. “I see Colby doing both of those things.”