Dr. William Danforth, Former Chancellor of Wash U, Dies at 94

Danforth, at age 44, took on a 24-year career in higher education. He served as chancellor of Washington University in St. Louis from 1971 to 1995, overseeing “an elevenfold increase in the university’s enrollment.” During his tenure, faculty members won 11 Nobel Prizes and two Pulitzer Prizes. 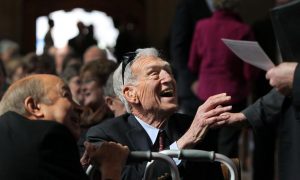 Danforth – born April 10, 1926 – was described as self-effacing and unassuming.

Danforth was responsible for gaining the university favor from St. Louis’ businesses after many disliked “the radical politics of students protesting the Vietnam War and military recruiting on campus.”

He himself was a big donor to the university and was able to attract other similarly large donors as well. Danforth directed that money into Washington University’s science and medical research and continued to prove himself a proponent of such research.

Adrienne Davis, WashU Vice Provost for Diversity, Steps Down in May

Has The TA Run Its Course?