As a qualitative sociologist I am drawn to stories that demonstrate social facts. Here is a story that I would like to share that underscores why I believe that we must be committed to anti-racist work and do so even in the midst of a year defined by disruption.

Once upon a time, a young woman walked into the wrong bathroom. She was exhausted from her travel from her home country to this new place. All she wanted was to wash her hands and splash cold water on her face. She was unaware of her error until someone grabbed her by the collar and yanked her backward, hard. This young woman of color was confused when her rescuer, also Black, kept pointing at the sign, which said “Colored.”

That young woman was my mother, and that was her introduction to the United States.

Confronting anti-Black racism was part of what shaped my mother’s sense of herself. But only part. She chose to become a citizen of the United States. She chose to use her subsequent training as a nurse in New York to offer reproductive health workshops on weekends to kids in Washington Heights.

She chose to mobilize and advocate for others. She saw that her choices in the present would help shape the future.

I am the daughter of an immigrant from Latin America and of a man who was the first generation in his family born in the U.S. and who was the first to go to college. I am the product of a family that like so many others actively resisted racism merely by living.

When I was a kid, my parents sent me to Fieldston, a private school in the Bronx that is affiliated with the humanistic principles of the Ethical Culture Society. I was a scholarship kid. My parents couldn’t really afford for me to go and in fact had to pull me out one year. My return was solely due to the help of Aunt Alina, my mother’s friend since nursing school, a Polish woman who was a Holocaust survivor.

Aunt Alina was a saver of everything and this included money. With her help, I was able to graduate. How incomprehensible that the trauma of captivity and dehumanization – the histories of the Holocaust and of anti-Blackness and xenophobia, bound these two women to one another for life.

Their ability to survive oppressive dehumanizing systems leaves me in awe. Their dedication to challenging barriers and transforming them into opportunity inspires me. They lived full, creative lives of purpose–and it is for them that I continue to challenge myself as well as the systems of injustice that still persist.

How is it that the world is so different than when my mother and Aunt Alina came to the U.S. and yet so much remains unchanged? How might we understand where we are as a nation right now where our racial legacy is concerned?

Consider the power of racism. Racism is an idea, a complex system, one that is tangibly experienced. It is irrational and is regularly rationalized, a shapeshifter and a paradox. For example, our recent history includes both the first Black president and increasing acts of supremacy. How is that possible? Because countering racism requires regular, dedicated anti-racist work.

Anti-racism is about dismantling systems, and systems don’t change overnight. We forget that because we think moments of progress are proof of full systemic change.

Sadly, our nation is often jolted back to the reality that the work isn’t done only when following publicly documented acts of aggression. Progress and injustice co-exist because we may not see systemic racism and don’t understand the ways systems reproduce inequality. 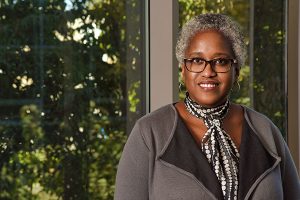 But we can see acts of violence. In the 1960s the images of young adults being assaulted as they challenged state sanctioned inequality by desegregating public spaces–images of dogs and firehoses, of faces contorted in rage, of people wielding weapons–helped move a nation from abstraction to humanist principles and to see the harm of racism.

Why did it take such images to move some people? It’s not as if this was the first documentary evidence of the violence of racism.

Consider Ida B. Wells, whose book The Red Record: Tabulated Statistics and Alleged Causes of Lynching in the United States was published in 1895 or Mamie Till, who decided to hold an open casket viewing of her 14-year-old son Emmett, lynched in 1955.

There’s always been plenty of proof.

Why then, do we experience collective amnesia as a nation where oppression and racism are concerned? Why does some racial progress lead us to believe we are post-racial when we should know better?

What we can say is that protestations of ignorance are now invalid. We are in a moment where everyone should know the very real and tangible costs of the daily corrosiveness of anti-Black racism and structural inequality. So, what shall we do?

Today, we have the opportunity and the duty to publicly and vociferously commit to being anti-racist. Doing so is about being on the right side of history.

Each of us must name, feel and hear the truth of each other’s experiences.  We need to grapple with the ambiguity of truth, and validate the lenses through which we each see the world in order to see each other in all our humanity. We need to model anti-racism and be the culture we want to see.

We have to ask hard questions of ourselves individually and collectively—and we have to act and make change. This work requires that we look at how we are organized, which voices are amplified and when, who is called to labor on these issues and why others aren’t.

It’s time to look at all of it.

Dr. Renée White, a scholar of race, gender and social inequality, is provost of Wheaton College in Norton, Mass.

What Will You Do to Embrace Who America Truly is in 2021?