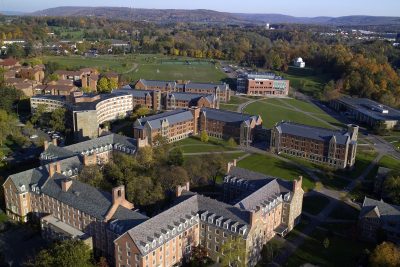 The two under-construction residence halls are part of the school’s North Campus Residential Expansion (NCRE), expected to open partially by fall 2021 and completely by fall 2022.

“For both of these extraordinary Cornellians, we wanted to create a memorial that would be seen by, and have its doors open to, ‘any person’ at Cornell,” Pollack said, “reminding all of our Cornell students, not just those in a particular field or college, that their path from Cornell can take them anywhere.”

Pollack announced the creation of the Ruth Bader and Martin D. Ginsburg Program – established by alum Jeff and Christie Weiss and supported by other donors – which will be used to create a new program at Cornell honoring the interests of Ginsburg and her husband, Martin.

In the address, among other things, Pollack discussed the school’s faculty accomplishments, COVID-19 response and research news and spoke about Cornell’s financial difficulties – “an additional $90 million in financial need related to the pandemic just this year,” according to the press release.

Due to Pandemic, Cornell Suspends ACT/SAT Requirement for 2021 Applicants