While Oct. 12 marked the federal holiday of Columbus Day, given explorer Christopher Columbus’ ties to colonization, racism and enslavement, many cities and states across the nation chose to observe Indigenous Peoples in virtual celebrations.

And colleges were part of the effort to honor the history of Native Americans.

“Colonizers not only steal land through unthinkable violence, but they erase and appropriate local cultures, and transform native peoples into refugees, third class citizens, prisoners and cheap labor in their own homelands,” said Dr. Kim Jensen, director of the Community College of Baltimore County’s (CCBC) Community Book Connection. “Colonizers repress all forms of resistance, even non-violent cultural resistance. To add insult to injury, settler colonial societies justify these abuses by inventing harmful myths of racial and religious superiority.”

During the celebration, Dr. Dennis E. Seymour, dean emeritus at CCBC and a member of the Eastern Band Cherokee, explained and highlighted different types of Native American regalia, drumming and dancing.

“What we wear is regalia, not a costume,” he said. “If you are dressing up for Halloween, you are wearing a costume. We only dress up in who we are and what we are, so we are not in costume.”

While explaining and playing the different types of drums, his goddaughter demonstrated the shawl dance.

“The drum is sacred,” said Seymour. “The beat of the drum, unlike most drums, is the heartbeat of the Natives.”

Discussions also centered on the impact of colonization and Christopher Columbus on the lives of Native Americans.

“In [Columbus’] logs when he first arrived in the Bahamas and encountered the native people, he talked about how proud they were, how friendly they were and how often that they provided sustenance to his people,” said Seymour. “Then in the same paragraph, he said how easy it would be to enslave them. That is the history we are overcoming and the history we are trying to in fact correct.” 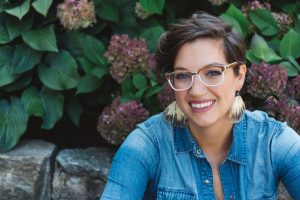 Jensen encouraged the audience to think about how the U.S. government can make amends for its long mistreatment of Native Americans.

“We affirm that our college is committed to truth-telling, to refuting falsehoods from the past and recognizing the Indigenous Peoples rightful place as the true natives of this land,” she said.

CCBC’s event was associated with their interdisciplinary reading initiative called Community Book Connection, which was created to “promote a culture of dialogue, discussion and debate,” the school said. This year, the CCBC community read “The Truth About Stories,” by Thomas King to look at how storytelling shapes identities and human interactions.

But other institutions held similar events on Monday.

At many institutional events, speeches now begin with land acknowledgements. However, these acknowledgements should signify a deeper commitment to the communities and relationship building, according to Dr. Adrienne Keene, an assistant professor of American studies and ethnic studies at Brown University.

“It feels a little hollow to acknowledge the land without acknowledging the actual people who come from it,” she said.

During her presentation, Keene, who is also a citizen of the Cherokee Nation, showed images of “Native Americans.” The photos that existed were not a contemporary representation of Native Americans, as they were depicted in the past with a high population of men and limited variety of regalia.

To meet Native students’ needs, faculty and staff at institutions must let go of these Native American stereotypes, she said.

To serve Native students, the focus must be on changing all points of the pipeline rather than specifically focusing on postsecondary education.

According to Keene, for every 100 Native 9th graders who start high school, only 48 will graduate and 20 will enter a form of postsecondary education, but only one will graduate.

Many colleges are also hosting longer celebrations. For example, El Paso Community College plans to hold panel discussions every weekday for the two weeks on a diverse set of topics, including ways to build relationships between Native Americans and the academic community, breaking down stereotypes, embracing the “mother tongue” and how COVID-19 has exacerbated health disparities.

“To me Indigenous Peoples Day is not just about celebrating the heroic, steadfast creativity and resistance of Native Peoples for 24 hours and then returning to business as usual,” said Jensen. “One day is not enough. Instead Indigenous Peoples Day is a call for a reckoning with racist systems, beliefs and practices that hold all of us captive in the dark ages where might makes right.”