Dr. Chinua Akimaro Thelwell has always found college classrooms to be one of the “few spaces in American society where people could have honest and informed conversations around race and racism.”

When entering the higher education space as a professor, Thelwell wanted to incorporate those ideas and conversations into his teaching.

At William & Mary (W&M), some of his research focuses on Afro-diasporic history, Asian American history and the history of the idea of race. 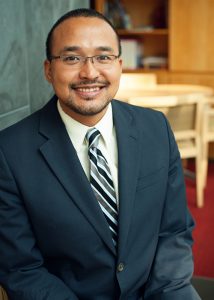 “Many Black and Asian students who I have taught have not had opportunities to study their own history,” says Thelwell, associate professor of history and Africana studies at W&M. “So, what I do is take these marginalized histories and I recirculate them in ways that are empowering to those students. But also empowering for all students.”

Thelwell also teaches the “History of Hip-Hop,” in tribute to his childhood identity and fascination. Growing up, he was surrounded by friends who listened to rap music and were interested in hip-hop culture.

Seeing his passion and wanting to encourage reading outside of school, Thelwell’s mother gifted him books on hip-hop every birthday and Christmas. Through that, he developed more knowledge of hip-hop culture.

Coming into academia, Thelwell was asked what types of curriculum he was looking to build. His pitched a hip-hop course, which intrigued his colleagues.

During his class, Thelwell emphasizes that he is not the “last authority” on hip hop.

“I tell my students that I wasn’t born in the Bronx,” he says. “I wasn’t there during formative years when hip-hop was first emerging in the 1970s. I wasn’t even born yet. I come to hip-hop as someone who has been listening to rap music for many years, reading scholarship and just following the culture.”

Thelwell’s favorite part of teaching is when his students audibly respond to the presented information with “wow.”

“I really appreciate those kinds of moments where students are basically saying that their minds are blown,” he says. “Those are rare moments, but they make me feel like the students care about the material just as much as I do.”

Beyond his teaching experience, Thelwell also has authored two books.

His first book, Theater and Cultural Politics for a New World, celebrated his mother’s theater company.

After seeing that many theater venues in western Massachusetts were Eurocentric, Thelwell’s mother opened the New World Theater to offer a space for artists of color to share their stories.

In 2009, the theater closed. However, it became a form of influence for Thelwell and taught him about performance as a “form of anti-racist discourse.”

After years of research, Thelwell’s second book, Exporting Jim Crow: Blackface Minstrelsy in South Africa and Beyond, was published this spring.

“American racism is global,” he says. “It is not something that only affects racial minorities in the United States. American racism has been exported abroad in the form of blackface minstrel shows and racist movies like ‘Birth of a Nation.’ And then because anti-Black racism is a global phenomenon, I believe that anti-racist thinking also has to be global.”

As an interdisciplinary scholar, Thelwell has found it difficult to keep up with the new developments across various academic fields. However, he enjoys being able to “learn for a living.”

“In this late capitalist economy, many people spend a lot of time just trying to put food on the table and don’t have time to study,” he adds. “You have to pay rent. I think it is just a great privilege to be a professor whose job is to study for a living. I am really grateful to be here. And I am thankful to all the people who have helped me along the way.”

This article originally appeared in the October 15, 2020 edition of Diverse. You can find it here.

Like a Boss: Peterson Stands Out in World of Hip-Hop Scholars