The Road Not Taken: Dr. Michael Sorrell Reflects on His Path to the Paul Quinn College Presidency - Higher Education

The Road Not Taken: Dr. Michael Sorrell Reflects on His Path to the Paul Quinn College Presidency

Although he was born and raised in Chicago, he came from a Southern family full of educators.

“My mother’s first cousin, who was really like her sister, would always tell me, at some point you will find your way into the family business of education,” says Sorrell, who is president of Paul Quinn College, a small, private historically Black college (HBCU) in Dallas, Texas.

He had other intentions.

Sorrell planned to pursue a career in public service. Eventually he wanted to own and operate a National Basketball Association (NBA) franchise. However, his career plans shifted while he was an undergraduate at Oberlin College. At the time, he had the opportunity to have dinner with Dr. Johnnetta B. Cole, who was president of Spelman College.

“She is just regal,” says Sorrell. “It is as if you are in the company of someone whose elegance and grace is just unbelievable. By the end of that dinner, I left thinking, ‘If this is what HBCU presidents are like, this will be my last career.’”

After earning his law degree at Duke University, Sorrell moved to Dallas and built relationships with a group of former college basketball athletes — some of whom had played for Paul Quinn College. Each weekend, they played games at the downtown YMCA gym together. 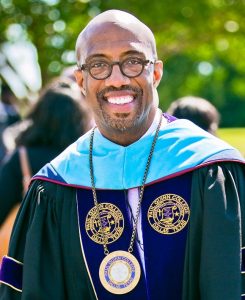 “They made Dallas a home,” he says. “They introduced me to their friends. They made me feel welcome. And I am one of those people where, if you are ever good to me or my causes, I always say thank you. I just thought these folks have been so amazing to me and one way I can say thank you is to pour into their school.”

Sorrell began donating money to Paul Quinn and eventually received speaking engagements. He also served as an adjunct professor for a semester.

At the time, the school’s president made the decision to step down. Thinking he wanted to be president, Sorrell called up the search firm and expressed his intention of pursuing the position. However, it never occurred to Sorrell to earn a doctorate degree or take education classes.

“I just figured that when I got done with what I was doing, I would be successful enough at it that it would create the opportunity,” he says. “But I never planned on it in a way where I thought I should perhaps take the traditional path.”

Without any experience in higher education, he was “politely brushed aside.” However, after being persistent, Sorrell was eventually asked to sit on the board of trustees.

While serving on the board, Paul Quinn went through a period of instability. In a span of four years, three presidents chose to leave.

“I watched each time as the board went and identified other people to have the opportunity,” says Sorrell. “It just wasn’t my season yet.”

Finally coping with the idea that he would never receive the job, he set his sights on pursuing and purchasing the Memphis Grizzlies NBA franchise. While in negotiations with the NBA, Paul Quinn’s president stepped down and Sorrell then received a phone call from Paul Quinn’s new board chair asking him to be president.

Since he was waiting to hear back about his bid, Sorrell told the board chair that he would decide within 90 days. The NBA deal ended up falling through.

“After those 90 days, I walked onto the campus that first day and I was like, ‘This is where I’m supposed to be,’” he says. “I can’t explain it other than it was just a real sense that I was in the place that I was supposed to be.”

A turnaround at Paul Quinn

At the start of his presidency, Paul Quinn struggled financially and faced potential closure.

During his inaugural address, Sorrell told the community that the school would “become the greatest turnaround story in the history of higher education.” Now, after 13 years as president, he feels that Paul Quinn is on its way to fulfilling that comeback story.

According to Paul Quinn, as recently as nine years ago, its fall to fall retention was 21%. Now for regularly admitted students, the retention rate is regularly 80%–90% — ten times the fall 2008 retention rate.

In partnership with PepsiCo, the unused football field was transformed into the WE over Me Farm, which has grown more than 60,000 pounds of produce and has a 3,000 square-foot greenhouse. The produce is used in the dining halls and sold to local restaurants and grocery stores.

Additionally, 15 abandoned campus buildings were demolished. By the end of this year, the first new building in 40 years will be completed.

“I’m proud of my student successes,” says Sorrell. “You know, the ones who succeed from unlikely places. I am really just humbled by who we have become. It was daunting odds.”

Over the years, Sorrell has earned a number of accolades including the Distinguished Alumni Award from Duke University in 2018 and the Dallas Bar Association’s 2016 Dr. Martin Luther King, Jr. Justice Award. He is also a past recipient of the Dallas Urban League’s Torch for Community Leadership.

HBCUs serve many students who are Pell-grant recipients and come from lower socioeconomic backgrounds. Students often also have to balance work, school and taking care of their own families.

“They are coming from communities that are disproportionately impacted by every disruption,” says Sorrell. “So now you have the epic disruption of our students because they are vulnerable. Their families are most likely to be disrupted financially and are having the toughest time bouncing back.”

Due to the impact of COVID-19, Paul Quinn remained online for the fall semester. Decisions for the spring will be announced in the upcoming months.

In response to the pandemic, Sorrell found that some segments of the higher education community have “shown sensitivity and the ability to really put their students and their staffs before themselves.”

“I think that there are people who have really worked hard to get this right and I don’t think they are praised enough,” he says. “I know it’s hard to send everyone home and have to try to figure this out financially, especially those institutions in major cities.”

Prior to COVID-19, higher education had a trust issue because many people felt they were being taken advantage of with the high cost of tuition and fees, according to Sorrell.

“When you are dealing with that, it’s hard to make a comeback,” he says. “It’s hard to then turn around and say, ‘trust me.’ So, I think higher education is going to have to answer the question, once we get to the other side of this, of ‘Who are we?’ Did we live up to our potential? Who will we be going forward? And at what point, do we stop believing that all of our traditions still make sense?”

For future scholars currently entering the higher education workforce, Sorrell advises them to be flexible, “to stop worshipping at the shrine of tenure” and “to stop falling in love with being a public intellectual.”

He acknowledges that higher education “needs leaders whose ambitions are not solely dedicated to career advancement.”

“Speak to the moment, understand that everything can’t be calculated,” Sorrell adds. “It can’t be about your next opportunity. It has to be about those that you are charged to lead and lead from wherever you are. So be the face of new higher ed, not old higher ed.”