The organizations are all part of the Scaling Partners Network, a group brought together by the Bill & Melinda Gates Foundation. Signatories include the National Student Clearinghouse, the American Association of Community Colleges, Achieving the Dream and Excelencia in Education. 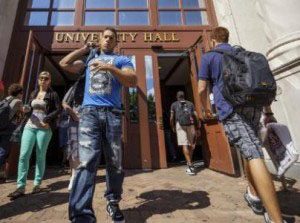 “On the institutions or systems side of it, everybody is still trying to put out fires,” said Nyema Mitchell, associate director of Jobs for the Future Inc. (JFF) and one of the signatories. “And I don’t know that transfer is a priority.”

But she and her colleagues are arguing that it should be.

Scholars are expecting a wave of student mobility, including students changing their educational pathways as the pandemic adds more uncertainty to their lives.

According to a report released by the National Student Clearinghouse Research Center last Tuesday, transfers from two-year to four-year institutions “unexpectedly increased” by 2.6% after no growth last year. Overall transfer enrollment, however, is down by 4.7%. While that’s only slightly steeper than enrollment slumps across higher education, it’s also double the decrease from last year.

Transfer trends are also historically uneven. The way transfer pathways are – or aren’t – set up can “promote serious inequities and injustices by income, race and ethnicity,” said Dr. Martha Ellis, interim managing director of the Charles A. Dana Center at The University of Texas at Austin and one of the signatories on the call to action.

Meanwhile, 48% of students from low-income backgrounds go to community college, yet only 9% graduate with a bachelor’s degree within six years.

For Mitchell, creating smoother transfer pathways is “key to improving equity in postsecondary education” at a moment of national reckoning with racial disparities. While universities are juggling different priorities amid the pandemic, she doesn’t want to see transfer policies overlooked [or neglected], because they have the potential to “make a really big impact on improving … completion for Black and Latinx and indigenous students.”

“If institutions and systems are serious about improving the racial equity gap that exists, transfer is a great place to start,” she added. “Black and Latinx students come into your institutions with the intention to transfer, but I would say institutions lack the incentive to make sure that happens or to create a path in which resistance is not met by breakdowns in systemic structures.”

To address some of those breakdowns, the call to action includes a list of recommendations to both higher education leaders and policymakers for ensuring transferable credits and smoother transitions. At the institutional level, it suggests measuring success by collecting data on transfer students’ success disaggregated by income, race, ethnicity, age and gender. It also emphasizes the importance of scholarships and financial aid for transfer students. And within the context of COVID-19, it calls on the universities to clearly communicate that credits under different grading systems, such as ‘pass/no pass,’ should count for transfer credits institution-wide.

Too often, there isn’t enough communication between institutions, Mitchell said, and students end up with credits that don’t count at their new university, setting them back. This is in part because university departments often individually decide what credits they accept from other institutions, and those decisions aren’t always clearly articulated to students and their advisors.

State policymakers can play a role in creating better communication between institutions by incentivizing it, Ellis noted. For example, some states have performance-based funding for colleges based on student completion rates. She would like to see programs like that prioritize transfer student outcomes. Thus, schools would have another reason to work together: transfer students could move from one institution to another with their credits intact and graduate in a “timely manner.”

She also pointed out other opportunities lawmakers have to improve the transfer process, namely ensuring that transfer students have equal access to financial aid that can transfer between institutions and that dual enrollment programs for high school students offer college credits that actually transfer.

From Ellis’s perspective, it’s in states’ interests to focus on equitable solutions for transfer students, especially in an economic downturn.

“Transfer is a priority for the state,” she said. “In order for the state to have economic and social security and upward mobility and economic development for the future, they need, of course, a highly skilled workforce. And in order to get that, when you look at how students obtain degrees, transfer is going to be a critical piece.”