Dr. Elizabeth Rule was in the classroom at George Washington University (GWU) when some of her students began sharing concerning feedback with her.

As students in the university’s Native American Political Leadership Program (for which Rule both administers and teaches), they had traveled from all corners of the country, including Alaska and Hawaii, on scholarship to study in Washington, D.C.

“But they were telling me that sometimes they felt invisible, uncomfortable or erased in D.C.,” Rule says. “They felt homesick.” 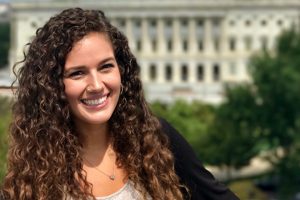 So, in the summer of 2019, Rule created the Guide to Indigenous D.C., a free, mobile app that leads users on interactive, self-guided tours through D.C.’s indigenous landmarks.

“I wanted to show them that, ‘You have a strong native community here in D.C., too,’” says Rule. “’And, by coming here, you are not isolated, you’re actually following in your ancestors’ footsteps by carrying on this legacy of advocacy and engagement with the nation’s capital.’”

Rule says her students responded positively to the app, telling her it changed how they saw D.C. and, more importantly, how they saw themselves in D.C. In the wake of the app’s success — it recently won MIT’s Indigenous Communities Fellowship award — Rule is developing a guide to Indigenous Baltimore as well as a guide to tribal colleges and universities throughout the nation.

But the apps are far from the only project on Rule’s to-do list.

She was recently appointed director of the AT&T Center for Indigenous Politics and Policy at GWU, too. Founded three years ago, the center is the only university-based research center in D.C. dedicated to American Indian, Native Hawaiian and Alaska Native policy issues.

“Being based at a university is one of the things that makes our center really unique,” Rule says. “We are able to draw on all of the resources that universities offer, such as tools for research and the opportunity for cross disciplinary alliance.”

That cross disciplinary approach shows in Rule’s work. In her role there, Rule has pursued a wide gamut of research projects, ranging from filming a tri-lingual documentary about the indigenous justice systems in Ecuador to writing legal code on how tribal court advocates should conduct themselves. The legal code was the result of her 2019 research, “Access to Justice: Native America,” which investigated barriers to justice in tribal court systems.

Her current work, the book manuscript Reproducing Resistance: Gendered Violence and Indigenous Nationhood, focuses on a topic close to her heart: the rights of indigenous women. In it, she explores the intersection of Native American/First Nations women’s reproductive rights, gendered violence and missing and murdered indigenous women.

The work received the 2020 Julien Mezey Award from the Association for the Study of Law, Culture, and the Humanities.

But Rule isn’t confined solely to research — she gets to work alongside students to boot, both as a professor and leader of two Native scholarship programs: GWU’s aforementioned Native American Political Leadership Program and GWU’s INSPIRE Pre-College Program.

“Oftentimes, in higher education, it’s easy to be siloed and to not actually work with the communities you teach about or research about. But I don’t think that’s best practice for Native peoples and Native communities,” says Rule. “So it’s been really rewarding for me to be able to do both of those at the center. I work with Native students, I teach about Native issues, I research native issues and I work directly with tribes.”

Born in Houston, Texas, Rule grew up in various places throughout the country, moving between both tribal communities and predominantly White communities. Watching her father work as an attorney who exclusively served Native communities, Rule knew at a young age that she also wanted to serve Indian country.

“Obviously, there are many ways individuals can work for and with Indian country,” Rule says. “Everything from STEM, environmental issues, medicine, over to humanities and social science fields. I found myself really interested in tribal policy, tribal governance, tribal nationhood and sovereignty.”

Rule went on to earn her bachelor’s degree in American studies from Yale University, followed by a master’s and Ph.D. in American studies from Brown University. She describes higher education as a transformative period in her life, comparing it to discovering a set of glasses that helped her understand the ways in which the world operated. Rule says she knew she wanted to provide that same experience for other students, to “put on those glasses for other people.”

“I personally see my work with the students and my research with Indian Country as deeply entwined,” says Rule. “Our Native students are the future of our tribal nations, so being with them and being able to interact with them and teach them and engage with them is inspirational to me. I learn from them in the same way that they learn from me.”

GWU Board Task Force to Reflect on ‘Colonial’ Moniker