About 300 distinct Indigenous languages flourished among Native American nations before European colonizers set foot in what would become the U.S. Today, only about a third of those languages exist. Of those, about 90% are at risk of becoming extinct by 2050, according to the National Congress of American Indians.

For that reason, Indigenous language scholars have long felt the weight of time on their shoulders as they race to save their languages. But when the COVID-19 pandemic hit, that weight felt even heavier.

With the virus being particularly harmful to people older than 65 and with elders being the majority of fluent speakers, language preservation work — at least, work that’s traditionally been done face-to-face — was largely put on hold. 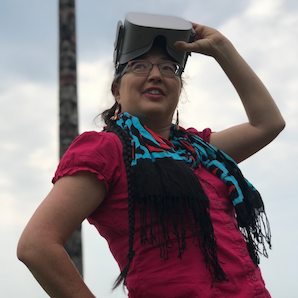 “There’s a saying that every time one of our elders passes away, a library burns down,” says Caroline Running Wolf, a Ph.D. student at the University of British Columbia who is researching Indigenous languages and artificial intelligence (AI). “Nobody wants to be that spark that sets the library on fire, so you’re in that difficult situation where the clock was ticking before, but now it’s ticking even faster.”

Just like thousands of other classes across the country, Indigenous language teachers adapted by moving online to Zoom once the pandemic took hold. And while it is not the same as face-to-face or immersion learning, Zoom does have one fortuitous benefit: accessibility.

A study conducted this past summer by Dr. Onowa McIvor, an associate professor of Indigenous education at the University of Victoria, observed that the shift to virtual learning noticeably improved accessibility for students previously unable to participate in Indigenous languages classes due to their geographic location.

“Almost exclusively, language offerings were face-to-face prior to COVID, and that’s because of the nature of what we do — it’s so territorial-based, relationship-based …,” McIvor told Canada’s CBC Radio in an interview on Sept. 23. “But then we have this huge shift online, and the benefit of that is that we’re seeing this huge uptake in people’s ability to access the language, especially if they’re living out of territory or anywhere around the world, so there is a swing towards much larger engagement and accessibility.”

“I’ve actually been picking up extra students who are joining me from all over the place, so these platforms do have a certain extra strength and flexibility to them,” says Dr. Anton Treuer, professor of Ojibwe at Bemidji State University (home to the country’s first collegiate Ojibwe program founded in 1969) and editor of Oshkaabewis Native Journal, the only academic journal in the Ojibwe language. However, Treuer caveats that the negatives of the pandemic still outweigh the positives — not to mention the fact that many rural students have limited internet access. 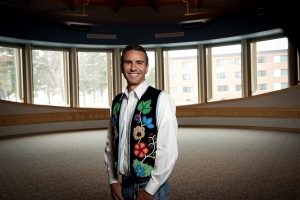 Still, he says “for a group like the Ojibwe, scattered across 125 First Nations in Canada and [the U.S.], it’s not realistic for us to freeze ourselves in time. We need everything in our modern time to reinforce our language so that means the Xbox, the computer, the phone. Technology applications can help us bridge some of our biggest barriers with language revitalization, which are space and time.”

Luckily, the intersection of Indigenous language and technology is nothing new and goes far beyond online Zoom classes. For more than a decade, Indigenous speakers have been making great headway to digitize their languages for future generations, noting its ability to — as Treuer put it — bridge space and time.

The software development company Ogoki Learning, for instance, has developed more than 170 Indigenous language apps for K-12 schools, tribal colleges and universities and native communities across the U.S., Canada and internationally.

“We believe it’s a right and not a privilege to be able to know your own language, so being able to bridge that gap is really important to us,” says Cherisse Daoust, a graphic designer and app developer for Ogoki Learning. “[Our ultimate goal] is to make language more accessible so anybody in the community can pick up the language, which is really important, especially if you can’t go out or go to school, then you can learn it while doing day-to-day things.”

An assortment of Ogoki Learning apps.

Daoust says the apps are made in close relation with Native communities, employing fluent speakers for audio recordings of words and phrases. And if the community doesn’t have the funding to create the app, Daoust says Ogoki will often help find and write grants.

Then, once the language apps are created, Daoust says they are typically free and open to the public. Recently, two Montana tribal schools, Aaniiih Nakoda College and Blackfeet Community College (BCC), have worked alongside Ogoki Learning to develop such apps.

“We’re not trying to reinvent any wheels. We just want to get something out into the universe that people can utilize to learn language,” says Jesse DesRosier, a language instructor at BCC. “The hope is students will be able to remotely access language, hear the language and move at their own pace.”

“[Learning your native language] is like being on top of a mountain and being able to see a full 360 view of your people’s universe, but the challenge is always climbing that mountain,” he continued. “As language teachers, we are able to provide different hiking tools and different trails to access that mountain.”

Meanwhile, some scholars are going beyond language-learning apps and entering the realm of AI, such as Dr. Caroline Running Wolf and her husband, Michael Running Wolf, who together founded Buffalo Tongue, a nonprofit that builds software to preserve Indigenous languages.

Together, they are working on various types of immersive Indigenous 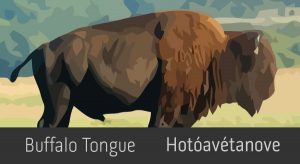 language technology, ranging from augmented reality, which involves pointing your phone at a nearby object and receiving the Indigenous word for that object, to virtual reality, which would involve wearing a headset in which you can explore Indigenous towns and hold conversations with virtual, but fluent, avatars.

But first, they are confronting a significant problem: the fact that automatic speech recognition software isn’t designed to recognize Indigenous languages.

Part of that research means creating software that recognizes highly polysynthetic languages, or languages with words made of many morphemes — a meaningful linguistic unit that can’t be broken down any further.

Whereas English is considered an isolating language, meaning it relies on multiple words and word order to convey meaning, most Indigenous languages are polysynthetic, meaning single words can often carry the meaning of an entire sentence. Because of that, “you basically have as many words as there are stars in the sky,” or as many words as there are sentences in English, says Running Wolf.

“Existing technology doesn’t even take into account the specificities of polysynthetic languages, which make up most of Indigenous languages,” says Running Wolf. “… The goal is that once we crack that code, once we have that framework, we can then apply it to other Indigenous languages.”

Though she and her husband are currently working on software specifically for Wakashan languages — a family of languages from British Columbia and the northwest corner of Washington state — that software could eventually be applied to hundreds of other endangered Indigenous languages across North America and the globe.

Additionally, the technology Running Wolf is working on could allow for easier access to a large swath of recorded materials, benefiting not only language learners and teachers but historians and Native American studies scholars too.

“Tribes could make some massive progress chipping away at the transcription bottleneck, at having transcriptions to the audio files of their ancestors, their grandparents for their students to learn from,” says Running Wolf.

Of course, Running Wolf is deeply aware of the ethical implications that may come with combining artificial intelligence and Indigenous languages. After all, in order to create the AI software that recognizes a certain language, you have to feed it data from that language — and what if that data includes sacred texts or family recordings of one’s grandparent?

That’s why she is also a huge proponent of tribes having sovereignty over their own data and of centering Indigenous perspectives in AI design. Earlier this year, she and other scholars from around the world published a position paper, “Indigenous Protocol and Artificial Intelligence,” to provide a starting place for designing ethical AI through an Indigenous-centered approach.

“AI is built by engineers that do not represent a cross-cut of society,” she told The Canadian Institute for Advanced Research (CIFAR) in July. “When we talk about data, for Indigenous communities, it’s not just about bits and bytes, it’s the sacred stories and voices of our ancestors.”

Running Wolf has received variations of that question before. To her, the answer is obvious.

“Indigenous languages are valuable to the ecology of thought that’s encoded into those languages,” she says. “There’s deep knowledge [in the language] that other cultures would benefit from, including mainstream Western culture, and that knowledge would be lost if we don’t keep those languages vibrant.”

She’s far from the only one who feels this way. Linguists ardently stress that words aren’t the only things lost when a language dies. Built into language are customs, values, worldviews, histories, jokes and traditions, says Treuer.

“You can’t separate language and culture from one another,” Treuer explains, illustrating his point by pointing to the values inherently built into the Ojibwe word “Mindimooyenh.” While in English, the word roughly translates as “elderly woman,” in Ojibwe, it literally means “one who holds things together,” emulating the Ojibwe’s respect for family matriarchs.

And not only are languages carriers of culture, but for teens and young adults, they cultivate identity.

In fact, one 2007 study of aboriginal youth in British Columbia had concluded that Indigenous language use was a strong indicator of health and well-being among Indigenous groups, finding that “youth suicide rates effectively dropped to zero in those few communities in which at least half the band members reported a conversational knowledge of their own ‘Native’ language.”

DesRosier emphasizes this point himself, when reflecting on his own language-learning experience.

“It gives you an identity,” DesRosier says. “And for a young Indian child in America, one of the main struggles is identity. I think that’s one of the leading causes of suicide and the addictions that come. But having a strong sense of identity gives us the ability to see ourselves pursuing our goals, seeing what we could be capable of and how rich and fluid our cultures are when they’re looked at within our own internal languages.”