Michele Pistone, a professor of law at Villanova University in Pennsylvania and an immigration lawyer for nearly 30 years, has founded the first university-based online certificate program that trains immigrant advocates to serve migrants and refugees. 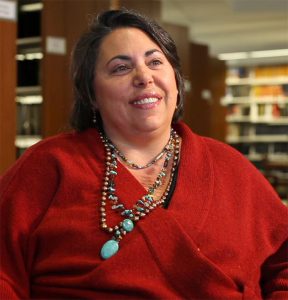 Six out of 10 migrants confront the immigration system without a lawyer, according to experts and immigration research cited on Villanova University’s website. In addition, a report by the Committee on Immigration Reform (CIRI) estimates conservatively that at least one million authorized immigrants living in the U.S. and eligible for the legal form of relief would have been granted status if they had opportunities to access legal representation.

“Reality confronts me every time I go into court, and I just needed to become part of the solution,” said Pistone. “I needed to figure out how to address this huge problem to access justice in immigration.”

Unlike the U.S. criminal justice system, immigrants in the U.S. aren’t automatically entitled to or provided a free lawyer — or a low-cost one for that matter, said Pistone. Sometimes immigrants don’t know how to find affordable lawyers. Currently, there just aren’t enough attorneys to meet the demand, she said.

VIISTA: Villanova Interdisciplinary Immigration Studies Training for Advocates is an asynchronous online program where students can take one, two or all three modules across three semesters (14-weeks each) to complete the entire program.

Each module builds on the other. Students who complete module one receive the certificate in immigrant accompaniment where they learn foundational knowledge about why immigrants migrate including history; government structure and ecosystem; cultural differences and sensitivities; ethical advocacy for the client; and more.

Module two and three focus on migration law and lead to the certificate in immigrant advocacy and immigrational trial advocacy. Completing one or both of these modules provides students eligibility­ — under existing federal regulations — to apply to become partially or fully Department of Justice “accredited representatives.” These are non-lawyers authorized to provide low-cost legal representation to migrant and refugee families via non-profit organizations in immigration court proceedings and before the Department of Homeland Security.

VIISTA allows individuals who are passionate about immigration or working with immigrants an opportunity to get their foot in the door, said Pistone.

“It’s another path as an alternate to law school, or as a gap between undergraduate and law school for people who think they want to work with immigrants but want to have exposure to the law first,” she said. “I could also see it for people who aren’t thinking about going to law school but still want to provide services to immigrant communities. This could be a separate career path.”

The latter is the case for Marilyn Bredar, a part-time ski instructor in Colorado, a full-time mother and a student taking the VIISTA course.

Bredar first got interested in immigration a few years ago when volunteering at The Challenge Foundation, a non-profit that works to break the cycle of poverty. This experience had awarded her an opportunity to mentor a young girl whose mother was undocumented.

“I didn’t really understand what went along with being undocumented, how [the mother] had to live in the shadows and how her life was really limited,” said Bredar.

Intrigued in her quest for understanding and helping, Bredar then joined Casa de Paz, the only organization in Colorado offering shelter to released immigrants and their families.

It was here that she had an epiphany: “The more I knew about immigration the more I realized I didn’t know,” she said.

After months of research to try to find a holistic program that could answer her questions about immigration, law and people, she found herself signing up for Pistone’s VIISTA program.

“What I really appreciate is that we’re learning about everything from not only the current laws and policies around immigration, but also the history, the geography of the different countries, and what’s going on in different countries that are causing people to want to migrate,” said Bredar.

What makes this program so special is that it’s taught from an interdisciplinary lens, Pistone echoed. In fact, she consulted with more than 25 different experts in history to theology to cultural sensitivity — among other disciplines and organizations — “to make the curriculum really rich” and give students the tools needed “to be effective immigrant advocates.”

“It’s so much more than understanding the law,” added Pistone. “You really do have to understand why people migrate. You have to have empathy.”

A lack of fully understanding this entire process can be a huge disservice to immigrants who need help in court, added Bredar.

Lailany Viera, an alumna of Villanova University and aspiring lawyer, joined VIISTA for some of the same reasons.

“One of the biggest rewards is having a network of people who are also passionate about the same kind of issues,” said Viera. So far, she’s heard from experts, immigrants in her own class and guest speakers who are part of the course curriculum. “It’s really valuable to learn from each other and read each other’s discussion posts,” she said of her classmates.

Both Viera and Bredar shared that the assignments have allowed them to hone in on their interviewing skills, cultural awareness and even work on mission-based projects that they might not have ventured into had it not been for the program.

“The homework doesn’t really feel like homework because we find it so interesting,” added Viera. “Everything is very purposeful.”

At the same time, “it’s a good way to channel frustration to things you see on the news in regard to immigration and do actual action steps,” said Viera.

VIISTA curriculum aligns directly with tasks students will conduct as immigrant advocates. It is designed to include professional development throughout all the modules so students can learn how to represent immigrants, refugees and migrants in court and the community, said Pistone.

“I really feel like VIISTA has the potential to change the future in terms of giving immigrants voices and giving them information and a person who can advocate on their behalf,” said Pistone. “There’s nothing more empowering than understanding the law and having someone who can help you navigate the system.”

Hispanics Bearing the Brunt of Xenophobia

Scholarships, Tutoring to Save ‘Lost Generation’ of Syrians